The Elephant Scientist (Scientists in the Field Series) 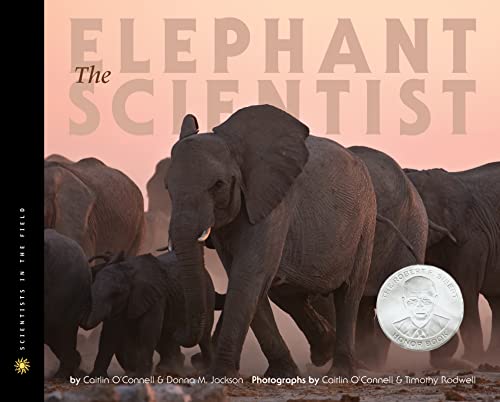 “The Elephant Scientist, with its clear writing, concise explanation of complex concepts, and exceptional photography, is a first-rate addition to the series.”

The scientist perches atop a concrete bunker peering through binoculars at an elephant family whose matriarch leads her charges to the Mushara waterhole in the midst of a Namibian scrub desert. The wise old matriarch suddenly stops and shifts her weight, tilting forward on her toes. Her followers do the same. The matriarch holds still as stone, occasionally lifting a foot and shifting it, or stretching out her trunk along the earth as if seeking an answer to an unknown question. Finally, the matriarch deems it safe to continue and the elephants in unison move toward the waterhole.

This elephant behavior had not been previously documented; however, elephant scientist Caitlyn O’Connell recognized this unusual performance from her time spent studying insects.

She’d watched tiny grasshopper-like insects called planthoppers communicate with others of their species by transmitting calls through their feet and vibrating the plant on which they rested. Was it possible that these mighty mammals were somehow communicating in a similar manner to that of a diminutive insect?

Follow Caitlyn O’Connell, “Mother of All Elephants” (so nicknamed by indigenous villagers because of her concern for the animals) as she tracks and studies wild elephants in two national parks in Namibia along the coast of southwest Africa.

Dr. O’Connell had several goals. People established farms and ranches along the edge of the parks, making the crops readily available to resident elephants. It turns out that elephants are very fond of corn and other human crops, food desperately needed by a populace that lives at the subsistence level. She sought to decrease human-elephant conflict by helping to protect farmers’ crops from elephant foraging. Harmless ways to warn elephants off farms included battery-operated car alarm triggered by trip wires, electrical fences, trenches, and barriers formed of crops such as red chilies, known to be unpalatable to elephants. Dr. O’Connell hoped to develop a better alternative. Ultimately, recordings of elephant alarm calls proved quite effective.

Once harvest season ended, Dr. O’Connell was free to pursue her other goal, the study of elephant culture and communication. She and her photographer husband, Dr. Timothy Rodman, recorded many of their astounding findings in words and images.

For example, the basic elephant family unit is formed of adult females and juveniles of both genders; however, when young males reach adolescence, their testosterone-driven unruliness means that the females force them from the herd. They join separate groups consisting of adult males, whose presence not only settles them down, but also actually decreases their testosterone levels. One of the more evocative photos in the book shows an adult bull elephant comforting a seemingly despondent adolescent male.

Dr. O’Connell and her associates then turned to the question: Can elephants “hear” with their feet? A CT scan of an elephant foot shows the animals stand on tiptoe with their heels elevated by a cushiony pad of fatty tissue. The fat resembles the “acoustic fat” found in marine mammals known to send and receive sound vibrations.

Through several seasons of research with the wild elephants using delicate seismic equipment, Dr. O’Connell confirmed that elephants can indeed feel vibrations through their feet and that these vibrations serve as a form of communication. These ground signals are distinct from the subsonic rumblings elephants emit that cannot be heard by humans. Working with a captive trained elephant, Dr. O’Connell later verified her findings.

After the Indian Ocean tsunami hit Thailand in December 2004, the media was filled with stories of elephants and their heroic deeds. The story of elephants racing to the devastated shoreline to rescue children after the tsunami has pretty much been discredited. But many sources reported that elephants seemed to feel both the precipitating earthquake and the tsunami that followed. Unexpectedly agitated elephants carrying tourists on their backs ignored their mahouts’ orders and raced for the hills after helping their chained comrades to free themselves. Dr. O’Connell’s work helps to explain that phenomenon.

The Elephant Scientist is the newest entry in the publisher’s outstanding series called Scientists in the Field. In these books, authors and their photographers spend time in the field with scientists working in a variety of environments.

Other recent books in the series feature scientists who study frogs, manatees, sea horses, honeybees, and bats. The Elephant Scientist, with its clear writing, concise explanation of complex concepts, and exceptional photography, is a first-rate addition to the series. Many people feel a special affinity to elephants because of their strong and loving family bonds. While humans share more DNA with chimpanzees than with any other animal, we are perhaps more like elephants in matters of the heart.