The Elephant in the Room: One Fat Man's Quest to Get Smaller in a Growing America 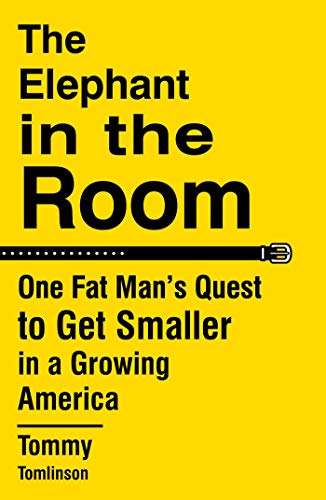 “The inspiring story of Tomlinson transforming his relationship with food may break your heart before it eventually lifts it.”

The Elephant in the Room should be compulsory reading for people of every size. If you share Tomlinson’s love-hate relationship with food, you just may learn a thing or two that will set you on a path to more normal eating. If you’ve not battled with food or weight, he’ll paint you such a graphic picture that you’ll never look askance at a fat person again. And if you don’t feel compassion for his struggles, check for a missing piece of your heart.

When it comes to being fat, Tomlinson tells it like it is: the stigma and shame, pity and pathologizing, self-loathing and yearning to be normal. He takes the reader beyond stereotypes of higher weight people as jolly, lonely, unsuccessful, or uncaring about their size and into the emotional and physical hell of being big in America.

He describes the dangerous insanity of weight-cycling—aka diet-induced pound shedding to rebound weight regain. He shares his hope and despair about slimming down, the deprivation of denying himself beloved foods, and the stress of finding chairs and clothes that are big enough for him. He confesses to a fear of being judged and found lacking merely because of his weight and to a well of shame and unworthiness, based exclusively on a scale number that, for him, cancels out all his considerable professional or personal talents and achievements.

Raised in a close southern family that loved to eat “comfort foods,” Tomlinson describes most of his meals as, “what poor folks ate in the South.” Although he was active and played sports, gradually he ingested more calories than he expended. As his weight increased, so did being bullied in school. The more he repeatedly vowed to stay away from fast food, what he calls his “deepest addiction,” the more he overate, often in secret, until he eventually grew to weigh 460 pounds.

Why could he not break his food compulsion? As he explains it, “Losing weight is a fucking rock fight. The enemies come from all sides. The deluge of marketing telling us to eat worse and eat more. The culture that has turned food into one of the last acceptable vices. Our families and friends who want us to share in their pleasure. Our own body chemistry, dragging us back to the table out of fear that we’ll starve.”

Add to this recipe for eating problems his early physical habituation to high-fat, high-sugar foods and his self-blame and lack of self-compassion which made him feel worse about himself and drove him to consolation eating.

Paradoxically, his successful attempts to diet and lose weight only slowed down his metabolism and made weight regain a certainty. Then there was his deep-seated belief about not being lovable or deserving of health and happiness, his lack of self-love, plus his vulnerability and terror of rejection and use of fat as a decoy. Lacking effective self-care skills, he knew of no other way but eating to deal with the blues and the blahs and fill his emotional void. Moreover, he thrilled at rebelling against rules by overeating or sneak eating.

The turning point in his relationship with food came from twin epiphanies: admitting that his problem was that “I don’t want to grow up” and acknowledging that “Of course I’m worthy of love.” They led him to finally take responsibility for his health and self-care by changing his eating and exercise habits for good, but slowly and without the rigid restriction of dieting and perfectionism. Although eating disorders therapists wouldn’t recommend his calorie-counting approach, it’s been working for him. Between his diligence at writing down everything he eats and using a Fitbit to keep him moving, he’s getting healthier little by little, the best way for habits to stick.

Beyond his eating and weight struggles, he enjoys a happy marriage with the love of his life, makes friends easily and socializes with them often, remains close with his family, and has forged a name for himself as a journalist. A superb storyteller and wordsmith, Tomlinson’s memoir is abundant evidence of why, despite career ups and downs, he is so popular with readers and respected by his peers.

The inspiring story of Tomlinson transforming his relationship with food may break your heart before it eventually lifts it. Note, however, that this is only one man’s story. More enlightened, higher weight people refuse to internalize societal fat stigma to begin with, avoid weight-loss diets, strive for health and not weight loss, practice effective self-care, and recognize that myriad factors contribute to size beyond eating and exercise, including genetics, biochemistry, trauma, life skills, personality traits, and unresolved intrapsychic issues. Tomlinson’s eating problems might have been resolved if he’d found and committed to working with an eating disorders therapist at any point in his life.