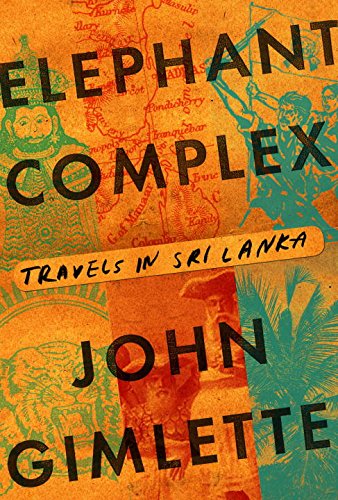 As Peter Frankopan writes in The Silk Roads (reviewed in NYJB), islands are important for several reasons. They create isolated biospheres for unique developments in evolution that could later have economic value. Islands do the same for cultures, including in a spiritual way, so much so that in a sociological sense they need not even be surrounded by water.

One of the greatest islands  that is surrounded by the much underappreciated Indian Ocean is the pearl shaped Sri Lanka, once called Taprobane or Ceylon. It is famous in modern times as the beloved home of the late scientist and writer Arthur C. Clarke.

Acclaimed travel writer John Gimlette in Elephant Complex takes the reader on a journey to that special place. Clarke and others called it the most universally oriental and so completely exotic place in South Asian culture. Gimlette himself writes, “My work has taken me to all sorts of places,” but “Sri Lanka has to be the most beautiful country I have ever seen.”

The island is famous for its natural beauty and biological diversity, having even crocodiles and leopards. Its most famous inhabitants are almost 6,000 wild elephants who famously, like the islands peoples, “follow the same paths all their lives, generation after generation.”

The author’s journey to this place begins in confusion, legend, and mystery, and so, too, it ends “in a battle with perplexity.” Although the island has one of the oldest histories on earth, so many civilizations rose and fell on it that no one knows when it all began.

Historically Sri Lanka is a fabulously wealthy land of gems, pearls, spices, and work elephants. It is a crossroads of the world that has suffered from foreign invasion more times than even Sicily.

For peoples famously reclusive and deeply tied to cultural roots, the Sinhalese and the Tamils live in a world of constant change. Otherwise divisive Buddhists and Hindus share the holy site of Kataragama to the number of more than one million suffering pilgrims per year.

The author’s change from confusion to acceptance of the island’s reality begins in its capital of Colombo where “if Alice ever wanted another Wonderland” here it would be. He describes it as cosmopolitan to the point of complete chaos, a city of “over one million” of Alice’s white rabbits.

Its society is a hodgepodge of all of the Far East, Southeast, and Indian Asia. Colombo is a state of mind, the author discovered, of elephants, ghosts, parades, cricket, outcasts, recent political history, spiritualism, and so much more.

Yet Gimlette found everywhere a common, deeply traditional, conservative culture. It grew and thrives, as does the whole island, within chaotic diversity and sometimes animosity between different peoples living together in one place.

“Colombo was aware of the rest of the island,” Gimlette writes, “but was never quite sure where it was.” He set out to find it and discovered a time machine that could take him to any of its many different paths and pasts.

Sri Lanka is deservedly famous for its natural beauty, but the author discovered that the countryside is also a marvel of engineering. The lakes region was artificially created thousands of years ago by precisely channeling water for 150 miles. In 137 BCE, the Ruwanweliseya Duṭugämuṇ was a building in the ancient world third in size only to Egypt’s two largest pyramids.

“The highest compliment a city can pay itself,” Gimlette writes, is “to create things no one else can understand.” For 1,400 years, the island’s capital was Anuradhapura, a now ruined city the size of modern Paris that had maybe two million people. It had a single building with 1,600 columns. Imperial Rome was at its height at that time but likely no more than half the size of this marvel.

Sri Lanka also has a more modern colonial past including rule by the British, Dutch, and Portuguese, the presence of all found in the people, the ruins, and the stories of massacres. The latest imperialists, the Chinese, have built a $210 million airport and an even more impressive manmade harbor.

In Elephant Complex amazing places are connected by stories from history and encounters with colorful people in the present. Gimlette warns us, however, that in the exploration of Sri Lanka, he and anyone else must beware their fallibility, much like the fabled blind men who tried to describe an elephant by touch.

We have an advantage in that we can close the book when we come and go to this Wonderland or Oz whenever we chose. Anyone who actually goes to Sri Lanka runs the risk of, as with Arthur C. Clarke and others, never wanting to leave.