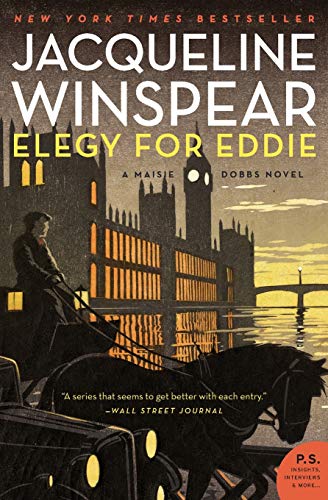 Long before the “Downton Abbey” craze, Jacqueline Winspear was writing remarkable mysteries about life in England circa WW I.

The books are chronological; heroine Maisie Dobbs has gone from sneaking into the library of the great house where she was a teenage housemaid, to student at Cambridge, to battle weary nurse, to owning her own business as a psychologist /investigator. The money that her mentor left to her ensures a comfortable living, but she has not forgotten that she is a costermonger’s daughter.

Her father’s contemporaries are still selling fruits and vegetables from horse drawn carts and come to her to ask to look into the death of their horse whisperer friend Eddie. He is a trifle slow witted, but his gift for sussing out what’s wrong with a horse (perhaps coming from being born in a stable?) is unsurpassed. When an industrial accident causes his death, his passing is determinedly suspicious.

When Maisie sends her investigator Billy (whose lungs are weak because he was gassed in the war) out to a pub to chat up some witness to the accident, he is beaten so badly he winds up in a hospital. Billy’s wife blames Maisie for the incident, causing Maisie to start reexamining her life.

This is what makes this series so good, so entertaining, and so different. The mystery is skillfully developed, and Maisie strives for a greater understanding of herself, the people around her, and how they all fit in the world they all share.

Truth be told, even before Billy’s run-in with the bad guys, Maisie is restless; her relationship with her lover James (heir to the great house where Maisie was a maid) is starting to feel suffocating. Going from being a maid to having one has created a burden for Maisie: She and James and are expected to attend social events, and the twittering social class drains her mental and physical energy.

Moreover it is 1933, and Maisie is forced to confront the terrible possibility that just having escaped the horror of one war; the world will be plunged into another. But the dinner party women concern themselves only with mindless gossip. And who is this Winston Churchill who keeps showing up wherever James and Maisie go?

A chord is struck with Maisie after it’s pointed out to her by more than one person that perhaps her money is being spent on people around her in order for Maisie to feel she lives in an ordered environment, a natural sensibility after the horrors of war she has witnessed.

But changing means upsetting the apple cart, disturbing the order she so craves. Without order what would her life look like?

Jacqueline Winspear has done nothing less than change the conventional mystery with Maisie Dobbs, a heroine who meditates, thinks deeply, and calls on her inner strength to live out the advice given to her by her mentor.

It’s hard to believe this series can get better—and then it does.