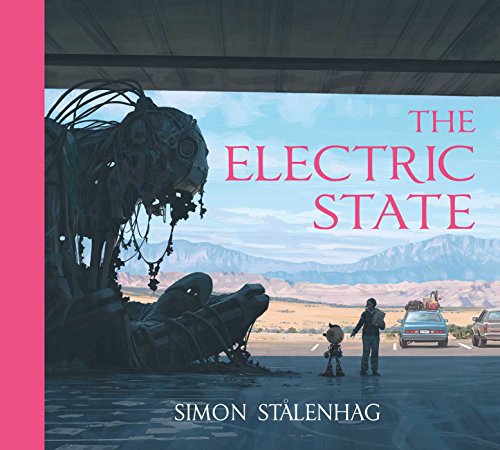 Simon Stålenhag’s The Electric State matches the notable Swedish artist’s futuristic digital paintings with an original story to produce an awe-inspiring vision of a species committing suicide, perhaps to be reborn as something new.

Stålenhag first achieved note through his paintings of stereotypical towns and countryside of an alternative Sweden in the 1980s and ’90s, where children discover and play with abandoned robots and mysterious failing machines scattered about by a dimensional rift. The artworks, created using a Wacom tablet and computer to resemble oil paintings, evoke a stimulating juxtaposition of nostalgia and wonder, a view of yesteryear out of kilter.

Developed through crowdfunding and released as a beautiful hardbound edition in North America by Skybound Books, The Electric State is Stålenhag’s third book in the same vein. In this story, Michelle, a teenage runaway, travels through Pacifica (an alternate California) with Skip, her robot companion, to find her younger brother. Pacifica is collapsing because of mass addiction to a virtual reality system that in turn is becoming a hive intelligence with its own mysterious designs. The landscape is littered with vast structures, downed airships, and the dead. But society is not so much collapsing as merely being discarded by a species that no longer has a use for it.

“Interstate 15 was barely discernible under a soft cover of dust, and visibility was really low. Now and then abandoned cars would appear in the road . . . I took the first available exit and stopped in what I assumed was a rest stop. Outside, the wind whipped ferociously through the shrubs, and a tide of dust and sand swallowed them until I couldn’t see anything.”

The paintings provide snapshots of this apocalyptic road trip and are the main event; the text illustrates the paintings far more than the other way around. It’s an interesting reading experience, as the artwork to an extent both takes over and provides a starting point for the reader’s imagination. As both the artist and writer, Stålenhag was able to make pictures and words work together differently than what you’d find in either an illustrated book or a graphic novel. The result is bigger than the sum of its parts—paintings with narrative, postcards of the apocalypse.

“Something unbelievable has happened in the secret paradise of Cape Victory. Monsters do exist—the things moving in the mists out on the cape cannot be called anything other than monsters. I mean, you could see that they were basically build from scratch. Put together by humans. You could clearly see parts of drones: a leg, an arm, a laughing face. But they had something else—a complexity I’ve never seen before.”

Without the paintings, the story is intriguing, conveying a sense of mystery Stålenhag captures so well in his art. It’s sparse, however, more a road narrative than a typically structured novel, and likely wouldn’t be nearly as effective without the complementing art. There is very little in way of plot or characterization, and none of the plot questions appears to be answered; overall, the story is thin and even a bit flat. It seems to function similarly to the paintings, there to make an impression and evoke a purely emotional response, while providing some backstory for this dying world.

In the end, The Electric State is a striking and strangely compelling work of science fiction gothic. Providing a series of snapshots of an alternate Earth of yesteryear, it tells the story of how that world ended. For those wanting more, producers Anthony and Joseph Russo acquired the movie rights, with Andy and Barbara Muschietti slated as the adaptation’s director and producer.