Eileen Gray: A House Under The Sun 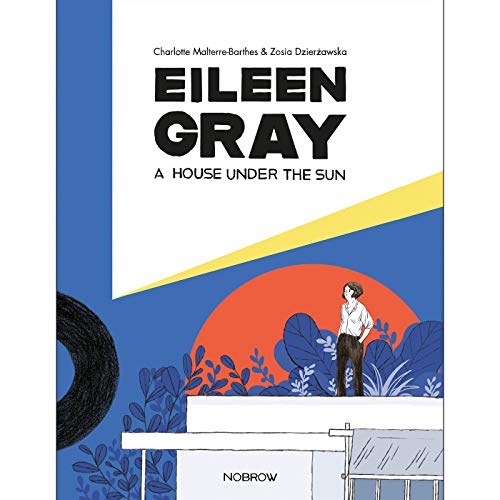 The narrative world is rife with accounts of the relationship between gender, and the recognition and attribution (or not) of genius. Many are the stories of women whose intellectual gifts remained hidden for decades, were lost from the record altogether, or whose contributions were co-opted, their place in history stolen because of their gender.

Scientist Rosalind Park was only recently recognized for her crucial work in the discovery of DNA structure.

One of the most important writers of her time, French novelist and memoirist Amantine Lucile Aurore Dupin wrote her best work under the nom de plume for which she is, still, best known: George Sand.

The movie Hidden Figures details the workplace oppression and segregation of the black women whose mathematical virtuosity made several of NASA’s successful forays into space possible.

Eileen Gray: A House Under the Sun by Charlotte Malterre-Barthes and Zosia Dzierzawska is a different story. It is a biographical graphic novel about the life of the Irish architect who created the E-1027 house, a pioneering icon of modernist architecture that signaled an important change from the popular idea of the time that a house was “a machine for living. A box that should be practical above all things.”

But her story is different because with the E-1027, designed and built between 1926–1929 in Roquebrune-Cap-Martin, in the Alpes-Maritimes department of France, Gray created a concrete (in more ways than one) rebuke to that arguably male, pragmatism-above-all-things notion, and moved modernism into a more human, dare we say, more feminine direction, in this way, suffusing the very argument, the very issue of gender, and indeed her vision and direction, into her art, making it impossible to permanently deface or hide.

In the book, during a heated conversation with longtime lover and architect  Jean Badovici, she says:

“The poverty of modern architecture stems from a lack of sensuality. That’s the real problem. Everything is dominated by reason. A house is not a machine to live in. It’s an extension of the inhabitant—their release, their emanation.”

Later, she continues: “You and I both know that the art of the engineer is not enough. It has to be guided by the primitive needs of humanity. It cannot just be reason without instinct.”

And, “Architecture is not just about beautiful arrangements of lines. But homes for actual people! Bodily Experience! The sense can be evoked through architecture, and furniture, textures, lights.”

In this way, the source of her talent, her femininity as expressed through architecture, is also the reason for the gendering (temporary erasure) of her role in the success of what was then a mostly male world.

There is, coincidentally, an architect’s sense of the importance of arrangement in the book, and it is this that makes it a great book. It is two books in one, partly about Eileen Gray’s profound contribution to modernism, and partly, a somewhat salacious reality-show story of her life, with flashbacks working an ordering force on the content, but also increasing understanding and, thus, the impact on our emotions as readers.

And so the book begins with Le Corbusier drowning in the water in front of the E-1027, creating mystery about the events leading to that day, while foreshadowing the circumstances of his death as just comeuppance for defacing the house with one of his murals (without permission), later buying the home and allowing it to be attributed to him, even when it represented thinking that was a clear departure from all he espoused.

Short passages show Eileen’s artistic journey, as well as her queerness and positive hedonist point of view about life. Her affairs with photographer Berenice Abbott and  writer Djuna Barnes, among others, and the effect of Parisian Bohemia on her artistic rebellion are also in here as part of her personal history, as is her relationship with Badovici, for whom she built E-1027, and which is depicted in quite a bit of depth, comprising his support and inspiration, but also his later abandonment.

Eileen Gray: A House Under the Sun is a satisfying book. It does not know everything, but does a great job of supporting its instinctual assumptions with fact, tracing and filling the gaps as a biographer would do, but with an eye toward enjoyment, in a true reflection of the notions Eileen Gray stood for throughout her life.

It is an added perspective to a new documentary on the topic and to the renewed interest in the E-1027 now that it has been restored (after years of abandonment following the death of Le Corbusier and the murder of the next owner in one of its rooms).

And though the title suggests that the book is mainly about the E-1027, about a “house that love built,” or about “the house under the sun,” it is really mostly about its creator and her still relevant notions for humans to live as humans who need peace, beauty, love, and sensuality in every aspect of their lives.