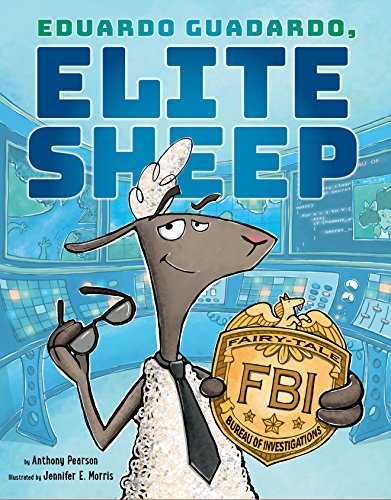 In case you were wondering, yes, it’s true; there is another FBI: The Fairy Tale Bureau of Investigations. Eduardo Guadardo may, on first glance, look like a fluffy, lovable sheep, but he knows five forms of Kung Fu, and in this imaginative action-oriented backstory to “Mary Had a Little Lamb,” he’s a hero until he isn’t.

Guadardo, this Elite Sheep, is assigned his own case, that’s how promising his brand-new career is. But he has a problem. Like any testosterone-infused movie hero, he has a flaw: He wants to do everything alone. He’s terrible at teamwork, so when the person he must protect, Mary, falls into the hands of a desperate and evil trio—wolf, troll, and witch—this Elite Sheep has to come to his senses, and cry, “I need help!”

Meanwhile, why does Mary seem so cool, despite her dangerous situation? Well, maybe because she is also a Special Agent! The entire adventure was all a test for the ego-driven, go-it-alone elite sheep, Eduardo Guadardo. In the end, he pairs up with Mary in a politically correct feminist-oriented ending.

Worked into the narrative is an impressive lexicon of terms: dossier, civilians, perpetrators, incognito, elite, mission, top secret, which will go down easily (and enrich vocabularies) buried inside all the antics in the story.

This is a zany adventure with vivid, cartoon characters and a multitude of jokes on every page. Perhaps there will be more adventures for the Elite Sheep. The premise is a promise of more to come.