The Edge of Normal: A Novel 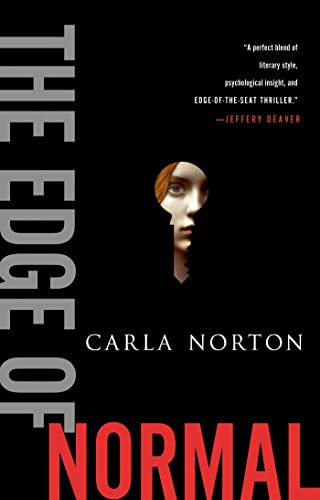 This book would more appropriately be titled The Edge of Abnormal, for that’s what it’s about.

The enchanting heroine, Reeve LeClaire, will spend the rest of her life seeking a normalcy impossible to achieve, because of a horrible experience that twisted her life: abducted and held captive for four years in her early teens, sadistically abused for what would be until death except for a lucky break that allowed her to escape.

This premise echoes a true story that occurred earlier this year, where three women were similarly imprisoned by a sadist and rescued by a fluke of luck.

Timing-wise, however, The Edge of Normal was conceived and written well before that event, so the author was merely prescient rather than involved. Nonetheless, Reeve’s fictional story sheds light on those poor women’s nightmare and recovery.

We meet Reeve six years after the fact, just as she’s starting to get her feet under her at 22 years old. But then another girl is rescued from a parallel situation, and Reeve is recruited by her therapist to help this girl transition back to “normal.”

Instead, both of them end up targeted by the same psychopath responsible for their horrors—and those of other girls yet discovered. He is so diabolically smart that he eludes authorities and continues to stalk his prey.

The book spends a lot of time in his head, which gives terrifying insight into that kind of sick mind. It also erodes any sense of security that female readers might have taken for granted before opening the book’s cover.

Yet the narrative does not induce fear through gritty detail. Rather, Ms. Norton uses an understated style, tainted with cynicism, that lets us fill in the blanks with our own imaginations. That’s more than enough to generate a slimy feel.

And that’s the book’s real story: the little-known evolution of personality after an ordeal is over. But some ordeals are never really over—as this book clearly portrays.

Reeve is one of the strong ones who is tempered by her suffering into something stronger. Thus she not only helps the other victims but also draws on her experience to take down the bad guy once and for all.

Her dual nightmare, ironically, helps her help herself by showing her the path to healing while opening the door to a new profession. This would be an inspiring story if it spent more time in Reeve’s head than the villain’s.

Here the author’s bias shows. Her deep background in true crime coverage, particularly the story of a woman kidnapped and kept in a box to be a sex slave, informs her fiction. The revolving points of view she uses keep the plot steadily building to the kind of page-turning suspense that makes a true thriller. But it leaves us aching to learn more about the extraordinary heroine.

Hopefully Ms. Norton will follow with a sequel—better yet, a series, since she’s laid such a solid foundation to build upon.