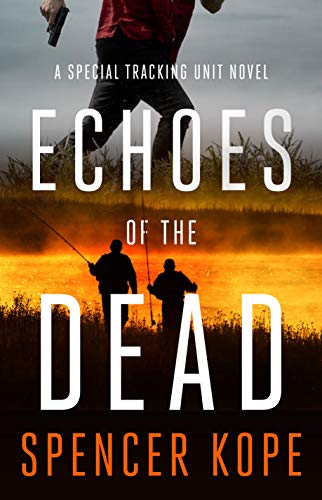 “Echoes of the Dead is a real page turner with all the requisite red herrings, missed opportunities, and wrong paths.”

For the reader who has a nice weekend coming up, pick up Echoes of the Dead by Spencer Kope. It’s a great way to spend that time. But be warned, once it is started, it’s hard to put down.

Kope has created a first-person character in Marcus “Steps” Craig, a tracker who is part of an FBI Special Tracking Unit. And what, you may ask is so special about him? This is fascinating. He sees a person’s essence. It is a synesthesia that developed after a near-death event he experienced as a child, and he uses it to track missing persons.

Kope describes this ability as “a haze . . . over [a person’s face] . . . a light at first, almost imperceptible, but in the coming weeks it grew more pronounced, and it wasn’t just on people.  It was on anything someone touched . . .” He refers to this ability as “shine.” And when Steps attaches a particular shine color to an individual, this synesthesia gives him the ability to track that person.

The story starts when four middle aged friends are reported missing from an annual fishing excursion. All are well placed men—a hedge fund founder, a deputy district attorney, an accounting firm CEO, and last but not least, a congressman.

Steps works with a three-person team including Jimmy Donovan, and Diane (no last name). “Steps” and Jimmy do the groundwork while Diane remains at base and does the research.

As they begin their search, they are joined by Joe Mingo of the Tulare County Sheriff’s office that is handling the investigation. The initial search finds Steps’ shine ability overrun with a multitude of colors, not giving him any good direction. But it doesn’t take long before they get the first call—one of the missing men has been found. Or has he?

At the county coroner’s office, they meet Dr. Ben Herrera, the coroner. Here Kope introduces the first challenge to the team, when the dead body is not that of one of the missing persons, and yet that person had his clothing and identification.

Kope takes the reader through a maze of twists and turns until they find the man who belongs to the ID—also dead.

At this point, Chen “Ross” Feng, of Bakersfield PD appears on the scene and becomes a part of the investigation. Joe Mingo has taken a back seat and Ross fills it with his stout body.

There is now a sense of further impending doom for the remaining three men, and it does not take long before number two shows up—also dead. It should be noted that Kope’s descriptions of the grim scenes are clear and visual. Not very pretty.

Two down, two to go, and Steps and Jimmy don’t have the slightest clue as to when they will find the other two, or what shape they will be in. Diane back at base does her research and provides clues for them. Her clues keep the team busy following up leads until they find number three. Fortunately, they reach him before he expires, and this is now their first break in the search.

Kope employs both first-person and third-person points of view throughout the story when he takes us out of Steps’ mind and into the killer’s thoughts. It’s an interesting take and one that can fall flat if not used properly. In this case, it works quite well.

The last victim is the congressman, and Kope takes the reader on a long and interesting journey when he moves out of Steps’ first-person point of view and into the third person of the killer as he preps for what he believes is the fourth and final death.

As the team gets past the red herrings and hangs onto the real clues, the last quarter of the book begins to close in on who the killer is, and where he is. Now all they have to do is race against the clock in order to save the congressman—assuming it’s not already too late.

If there are any drawbacks to Kope’s story, they are that while there is a clear explanation regarding the motive for the last attack, the motive is not clear for the first three attacks other than that all four men were camping together, and since the killer is an individual, how he captures all four of them is not made clear.

In spite of these drawbacks, Echoes of the Dead is a real page turner with all the requisite red herrings, missed opportunities, and wrong paths. Kope’s writing style is engaging as he adds just enough humor into Steps’ thoughts to give the reader a sense of actually being Steps.