The EC Archives: The Vault of Horror Volume 5 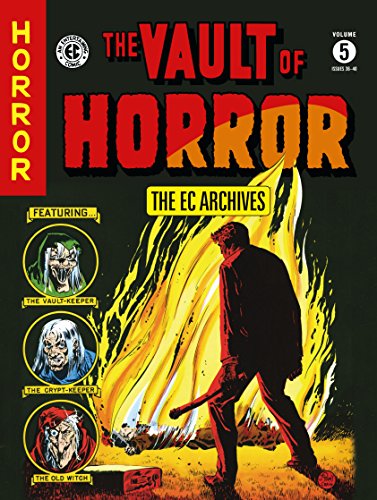 “EC produced the best comics of the era and The Vault of Horror Volume 5 is evidence enough that EC produced an idiosyncratic brand of horror that is undeniably American.”

For a time, the “E” in EC Comics stood for “Educational.” Unfortunately, kids and young adults in the late 1940s had little interest in educational funny books. When the “E” became “Entertaining,” EC finally took off as the preeminent publisher of crime, war, and two-fisted comics. However, EC truly buttered its bread with its line of horror comics like Vault of Horror and the infamous Tales from the Crypt.

Now, thanks to Dark Horse Comics, a whole new generation of comics fans can enjoy the brilliant work of evil geniuses like Graham Ingels, Johnny Craig, Jack Davis, and Al Williamson. The Vault of Horror Volume 5 contains stories from each one of these creators, and specifically highlights their work done in EC’s Vault of Horror line between 1953 and 1954. Altogether, this volume is a lush and loving presentation of EC’s brand of horror, which was dangerously transgressive for the time. Rather than just present gory vampire and werewolf stories, EC’s wicked pens dabbled mostly in revenge fantasies featuring the rotting and returning corpses of love’s many victims.

Perfect encapsulations of the EC brand include “Twin Bill” (written and drawn by Johnny Craig), a classic story of one cuckolded husband’s decision to bury his wife and her lover alive. Things go awry for Larry Bannister when he is forced to leave his 12-volt car at the crime scene. When he returns to replace the car’s battery, he discovers to his horror that the murder victims are no longer asleep in their makeshift tomb. “Twin Bill” is a beautifully drawn story that features a heavy use of blue and rain in order to create a dark mood.

“The Catacombs” (written by Carl Wessler and drawn by Bernie Krigstein) is this volume’s best piece of art. Featuring clear lines and excellent shadowing, Krigstein’s work on this crime story set in one of Italy’s ancient catacombs looks utterly modern. Sadly, the one problem with “The Catacombs” is that the tale is predictable.

Dark Horse Comics should be applauded for continuing to produced glossy reproductions of the EC originals. These were the comics that caused Congress to act, and in 1955, EC was forced to end its lucrative horror titles and put all its resources toward the popular humor magazine MAD. One can see why both Democrats and Republicans found EC abhorrent—the tales in this collection are cynical, bloody, and blackly comical. However, despite the disapproval of that generation, EC produced the best comics of the era and The Vault of Horror Volume 5 is evidence enough that EC produced an idiosyncratic brand of horror that is undeniably American.