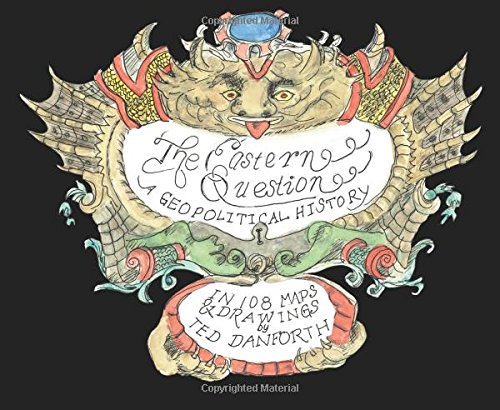 Ted Danforth’s book is an attempt to explain long-standing political tensions leading to 9/11. He sees a direct linear connection between “the Huns, Goths, Arabs, Mongols, Turks, Russians . . . and now Jihadi.” According to Mr. Danforth, each of those geopolitical actors have, in their turn, posed direct threats to the “West.” Indeed, “for the West, the East has always been a question: It’s where trouble comes from.” Hence “The Eastern Question.”

This is not a conventional book, either in presentation or content. Classifying it is not a simple matter. But it is clear that Mr. Danforth was motivated by the desire to bring an illustrator’s sensibility to that subject: “Sometime after 9/11, I began to see history graphically . . . began making maps and drawings in dialogue with texts so that the drawing ideally would illustrate the text as much as the text would explain the drawing.”

The text is arranged around 108 watercolor paintings, hand-drawn maps, and other illustrations—constituting a full 42 percent of book’s pages.

Flipping through the drawings with glances at introductory paragraphs presents a visually stunning book. It has the heft, feel, and size of a coffee table book. The printed text is double-spaced and presented on high quality paper; traits rooted in Mr. Danforth’s career as a professional letterpress printer.

The stated purpose of the illustrations is to assist readers to exercise their imaginations. Examples include: “The drama of East and West, of Islam and Christendom, . . . played out today in the Sicilian puppet theater [of] . . . large and gorgeously dressed puppets,” “the earth [as] . . . an enormous hive of insects teeming, swarming, moving this way and that over its surface,” “[Attila] as a pool player . . . striking the racked-up balls…[and] scattering the tribes of Europe,” “the West as a fortress built on a 16th-century model,” “the fallen Roman Empire as a giant broken egg,” and “Russia as a great bear with its tongue lapping the waters of the Black Sea, while its right paw reaches for the Mediterranean…and its left paw reaches south toward . . . Afghanistan.”

Other artistic and literary metaphors abound. Maps are explicitly presented as “metaphorical.” Several other creative literary devices are also employed, including imagined plays (“the fragmentation…of the [Roman] empire as a . . . geopolitical comedy in five acts”, fables (a story of “a great prophet” who “once upon a time” led “a Camel People” to try and “conquer the entire world), and a parody of diplomatic justifications by the British, French, Austrian, Russian, and German governments for their respective contributions to the outbreak of World War I.

The narrative is also occasionally melodramatic: “One has to be careful when one kills a dragon: its blood can kill you. The Soviet Union collapsed in 1991 but, like a dead dragon, it spilled the poisonous world of world revolution. It is one of the turning points of history; the beginning of what one might call a New War.”

Although there are many subsets of geopolitical thought, almost all share the assumption that geographical and climatological elements determine the course of human history and, therefore, determine the cause and conduct of conflicts among international political actors.

And that is where the author’s thesis is likely to draw criticism.

For Mr. Danforth geopolitics determine the competition between West and East. In particular, he focuses on three key dynamics that he labels: “Desert & Sown,” “East & West” and “Order & Fragmentation.” He defines these as: (1) people reliant on settled agriculture versus nomadic pastoralists whose respective economies are determined by climate; (2) the intermittent migrations or invasions of people from the “desert” into “settled areas of the ‘West’;” and (3) the swings between “order” established by desert invaders and “order” established by a hegemonic power from within the “Sown” itself.

“Fragmentation” occurs when established “order” collapses and has not yet been replaced. He focuses on a zone of perpetual conflicts that have been playing itself out in the borderlands between the land powers of the Eurasian “Heartland” and sea powers of the “European Coastlands.”

Many contemporary scholars criticize the geopolitical approach as frozen in the late 19th/early 20th century and for being too Euro-centric. They argue that today’s world of ever-larger numbers of state and non-state actors is substantially more complex.

But whatever that case might be, Danforth’s argument is rooted in geopolitical terms. He explains the Cold War in terms of the competition between NATO as a coalition of the European sea powers of the West—led by the United States—versus the Russian dominated “Warsaw Pact” land armies of the East.

From that perspective, the end of the Cold War created a vacuum across the borderlands separating the frozen north from the parched south within which the “Jihadi” threat emerged. That is the same territory in which the United States and United Kingdom tried to “contain” Russia during the cold war—what some analysts now call the “Global Arc of Instability.”

By definition, the title of the book situates it within a Western worldview—the book’s title is not, after all, the “Western Question.” But conflicts have existed—and continue to exist—not only between, but also within, both East and West.

Broad generalizations do not help us understand the variety of different political cultures, histories, motivations, and forms of political organization among peoples of the East—or the West either for that matter. Unfortunately, the book’s underlying assumption of a consistent struggle between “us” and “them” permeates the book.

Finally, the absence of any policy recommendations of any kind, whether directly linked to a theory of geopolitics or not, is surprising. The book ends with the fatalistic judgment that “we are [today] haunted by many ghosts of defunct empires—a long succession of failed states. . . . Houses rise and fall, empires are brought together and break-up, the desert presses on the sown, the sown presses on the desert, the East presses on the West, the West presses on the East. . . . If you would like to know the sequel of this story, you will find it in the daily news.”