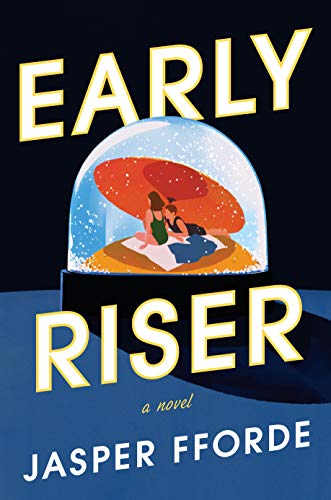 “Taking Early Riser into the summer reading stack will be surprisingly refreshing even though it arrives with both love and a shiver of foreboding.”

Dystopian fiction has become a necessary aspect to our politically unsettled and climate-challenged lives, and there’s a new longing for Joseph Campbell’s heroic figures to show us how to survive with honor and preserve a thriving planet.

As Jaspar Fforde leaps into the genre, an adult level of frustration and chaos appears: Early Riser, unlike Fforde’s long series of literary spoofs, lifts its curtain on despair and death, moderated by the equivalent of Big Pharma.

Charlie Worthing, a novice “winter consul” allowed to stay awake for the frigid months of the new form of winter—while most people lie in a drug-induced sleep to save energy—seeks the source of viral dreams that are infecting sleepers and the awake. For Charlie, the dreams overlap the strange things going on around him: manipulations by two sides of the culture clash, and provoked disappearances of those who might be able to object.

What makes Early Riser unforgettable, though, is not the particular form of dystopia Fforde displays, but the affection and loyalty that Charlie and some of his new acquaintances turn into effective action against pharmaceutical giant HiberTech. Even as Charlie tackles his first assignment, taking a “soul-dead” individual named Mrs Tiffen to be parted out and recycled, the small details of humanity catch at him like “stick-tights” caught walking across a field of seeding plants: “Mrs Tiffen could play the bouzouki,” he notes at the opening of the book. “Not well, and only one tune: ‘Help Yourself’ by Tom Jones. . . . She and I had not exchanged an intelligent word since we met five hours before, and the reason was readily explained: Mrs Tiffen was dead, and had been for several years.”

As Charlie confronts his first wakeful winter—where a mild day is around minus 40 degrees—he also notes how hard he finds it to believe that a person who can play the bouzouki is no longer a person. Alive. Loving.

Affection becomes Charlie’s own melted area. His Morphenox-twisted dreams and the viral psychopathy infusing the people he meets mingle with an artificial affair he’s been dragged into—the highly attractive (but crazy?) Birgitta needs him to pretend to adore her. “‘The best relationships always begin like a bad rom-com in my experience. I’ll find a tartan travel rug and a picnic set for the Sno-Trac,’ she added, now quite enthused by the whole idea.”

Fforde sweeps the action forward briskly, unafraid of mythologizing as he goes along, complete with Villains with a capital V. He conflates Winter with the possibility of global evil, so that Charlie admits, “The citizenry didn’t know or care what the Consuls did during the cold to keep them safe, they just wanted to wake alive in the Spring, same as always. For many people, the Winter didn’t really exist except in an abstract sort of way, and by consequence, neither did we.”

The book couldn’t be further from a “beach book” in its details, yet the cover catches a bit of the viral dreaming from the story and offers a beach scene (sprinkled with snow). It’s a good hint for this season: Taking Early Riser into the summer reading stack will be surprisingly refreshing even though it arrives with both love and a shiver of foreboding.