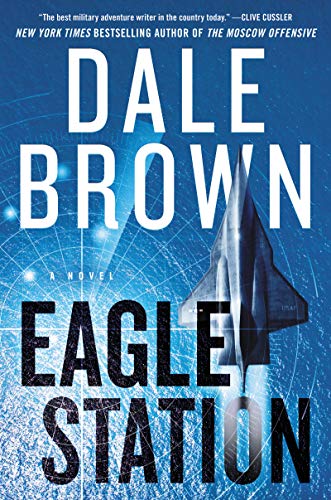 “The suspense of Eagle Station lies in how each detailed flight maneuver in air or space will turn out, and who’ll walk away with few enough injuries to survive—and return to Earth with enough air and fuel to complete the trip.”

Dale Brown’s Patrick McLanahan series of military thrillers developed a second generation a few years ago, and Eagle Station is the sixth book featuring Patrick’s son Brad McLanahan. It’s good to know that these protagonists will survive for more books in the series, if possible, as military expeditions and necessary sacrifices multiply.

In Eagle Station, the United States is engaged in an undeclared but very real war with Russia and China, for dominance of the air globally and of the nearer regions of space. The author is a former U.S. Air Force captain, and the first few chapters are nonstop equipment narratives. (There’s even a a glossary of weapons and acronyms at the back of the book, for readers who love the Air Force and Space Force related details.)

Although the U.S. military, including Brad McLanahan and his about-to-be wife Nadia Rozek, has a lot to celebrate as the book opens, having captured and turned around to its own use an armed Russian satelite (“weapons platform”), renaming it Eagle Station, there’s still an ongoing struggle for world dominance among the great forces, and the American team’s showing off new tech marvels in a face-off for control with the Chinese in the South China Sea. No sooner do Brad and Nadia finish this perilous exercise than their planning skills are in demand back at home for an international rescue mission that will depend on their extraordinary flight skills under fire.

Chapters from the points of view of Russian and Chinese military leaders let readers know, well before Brad does, that the superpowers on the other side of the globe have a new target to dominate: the Moon. Chinese president Li Jun and Russia’s de facto leader Marshal Leonov pool their resources to place a military base on the “dark side” of Earth’s moon. Their successful feint toward a different project manages to leave the Americans behind.

But the U.S. military with the McLanahans involved is more than an armed service: It’s linked intimately with military-led private enterprise, big investments, and teamwork with an American President who trusts this team.

And Brad McLanahan points out that the enemy collaborators are far from stupid: “He shook his head. ‘Okay, look, I get the drift. A surprise return to the lunar surface would be a huge propaganda win for Russia and China. But the risks involved in using a wholly untested spacecraft for a stunt like that are huge. One serious hardware malfunction or one software glitch at just the wrong time and five gets you ten, you end up with a bunch of dead guys drifting in orbit or smashed to pieces in some crater.’ Nadia frowned at him. ‘You should not assume that Marshal Leonov and President Li Jun share our views on the value of human life.’”

Brown’s writing offers no hidden motives or turncoats—everything is right out front, including enemy maneuvers. And enemy aliens have no redeeming features. The suspense of Eagle Station lies in how each detailed flight maneuver in air or space will turn out, and who’ll walk away with few enough injuries to survive—and return to Earth with enough air and fuel to complete the trip.

Although character development is not part of this book’s structure, the use of technology foreshadowed by today’s collaborations of government, the Space Force, and private enterprise is outlined in striking detail. In fact, some of the gear described has already been assembled by corporate groups like SpaceX, Blue Origin, and United Launch Alliance, as Brown notes at the start of the book. Brown’s fast-paced and risky portrayal of what the globe could see in terms of conflict is set in the very near future: labeled with the year 2022, with recent SpaceX news already meeting this tech fiction halfway.