DVF: Journey of a Dress 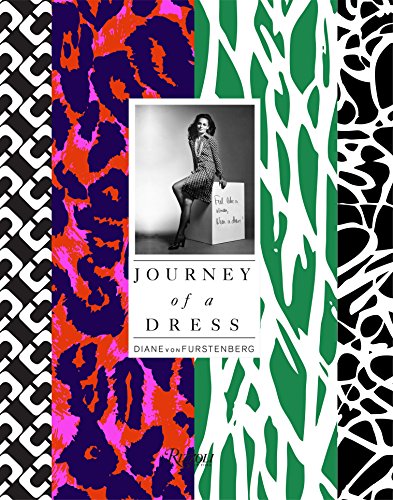 “Journey of a Dress is a fun retelling of a true fashion fairy tale.”

What is indisputably true is that there have only been rare instances in the history of fashion that rival the amazing story of the DVF wrap dress. Having lived through its christening and entire lifespan, these eyes can attest to the ubiquity and astounding popularity that this style enjoyed. From a fashion history point of view, the only thing that comes closest to it is jeans, but then again, jeans never went out of style.

Journey of a Dress is a visual diary of the dress’ start and where it is today within the hierarchy of fashion. Ms. Von Furstenberg was without a doubt the “it” female designer of that era who lived a life that her customers either aspired to or related to.

The book provides the reader with an exhaustive, if not encyclopedic photographic catalog of the wrap dress in its many and seemingly endless incarnations. The release of this ode to a wrap dress serves several purposes, the primary purpose being to serve as a catalog and celebration for an exhibition of 200 pieces of said dress at LACMA. The next raison d’etre for the book is the 40th anniversary of this fashion phenomenon, as well as a bit of self-promotion.

If you have never experienced the wrap dress then you might find this quite amazing for a single article of clothing, and it cannot be said enough times that this dress was akin to a style tsunami. Rarely, as stated, has there been anything that comes close to what this dress caused in terms of a fashion moment. A great deal of its success was not only due to its purpose and wearability but without question in no small part due to Diane Von Furstenberg herself. She was model, spokesperson, and designer who literally burst onto the stage of fashion from nowhere other than the society pages. Her immediate acceptance as an “everywoman” was equally astonishing.

If you are a boomer who was either in the fashion business, a fashion spectator, or a consumer who wore this item, the book is a trip down memory lane as well as a reminder that fashion was once all about the clothes one wore and clothes that served a purpose other than just for mere attention. For those who are rookie fashionphiles, let DVF’s story be a lesson to you: Journey of a Dress is a fun retelling of a true fashion fairy tale.