Dust to Dust: A Memoir 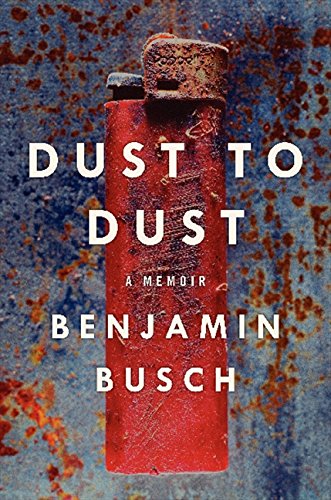 “No other writer has moved me as much as Benjamin Busch has in writing about war. No other writer has created such a moment of grace . . . Dust to Dust is a work of extraordinary merit. I’ve found no better book of any genre, by any author, so far this year, and likely will not in the months ahead. It is that rare sort of work that will allow you to be jealous of those who have yet to read it, because you know that intense pleasure that lies ahead. . . . In a world with so damned many books in it, Dust to Dust is one worth noting. . . . this is one to be savored.”

In the marketing copy on the back cover of his new memoir, Dust to Dust, author Benjamin Busch is compared with two other authors whose names have likely never been entangled together in a single sentence before. “Tim O’Brien meets Annie Dillard,” begins the pitch, “In this tough and tender debut memoir about our passage through life, from a decorated marine and actor who played a cop on ‘The Wire.’”

Other than the reference to one of the best television shows ever, nothing here seems particularly compelling, equaling the sort of blurb that causes a book to end up at the bottom of the pile next to the bed, where all “tough and tender” things belong.

But the idea of Mr. Busch being the addled love child of O’Brien, author of the best of the Vietnam books and blurrer of fiction and reality in his famed verisimilitudenous style and she of the lit-from-within trees, memoirist/essayist/pilgrim Dillard—apt though the comparison may seem—simply does not go far enough to give author Busch his full credit. Annie Dillard? Yes, but we need to add Thoreau as well.

For the comparison is not an overstatement. O’Brien, good as he is, is certainly not Mr. Busch’s equal in evoking combat. Norman Mailer and The Naked and the Dead (fugs aside) is also recalled in the clarity of the prose.

And yet, still not enough. Truth to be told, there has never been another book like Dust to Dust. No other book carries the full freight of combat including two tours of duty in Iraq: one in which the young soldier feels invincible, the second in which he feels a fearful certainty that he will die. These experiences are spotlighted so that we can see not only the whites of their eyes, but the spit, sweat, and blood—and places the war within the context of the whole of life, as if combat were completely akin to a football injury, or the first day spent on a movie set, or a night filled with coyote howls. The soldier here is another Cincinnatus, his nation’s need for him finished, returning to his plow.

Is the author to be likened then to Proust with a gun? Again, no. Dust to Dust is something more, something different. Comparisons fail.

Also on that back cover, the quote that you will be seeing everywhere if the publishers have their way:

“I knew very early on that I was a solitary being. I longed for the elemental. As a child I was drawn to wilderness and the ruins left vacant by human decline, neglect, and tragedy. War was wilderness, and I went there too.”

These words are important. Said right up front, they prepare us for what is to come.

They inform as to the shape of the book as well. The author, an elemental himself, divides the work among the basics—water, metal, soil, stone—in the sections of the book, allowing them to give structure to his words as they do to the world. But other aspects of Creation enter in as well—arms, bone, blood, and ash—each lending its name to a particular pensée.

As this, which opens the section called Ash:

“Ash is a substance without a real attachment to air or firmament. It is not part of the fundament, or earth. It exists only as an aftermath, a product of fire and tragedy, a stain on the ground and in the wind. It is made by the particular destruction of life down to its elemental carbon, or black core. Something has to die absolutely to become ash.”

Unlike most memoirs of war that begin in Parris Island or Quantico, Dust to Dust begins in childhood, with a simple thought:

“I was not allowed to have a gun. My parents were fresh from Vietnam War protests, and they had no intention of raising a soldier.”

Yet of course they did. And the fact that we come to know that soldier, his parents, and his backstory in upstate New York so very well means that by the time the soldier goes off to war in Iraq, we have come to care for him and his experiences as if they were our own.

It is impossible to read any part of this work and not be moved. Such as this, from the section called Soil, in which Mr. Busch, stationed in “the bunkers west of Jassan” in Iraq inspects a supposedly abandoned enemy safehouse:

“A hideous dog briefly guarded the entrance as I approached. It was one of the many that crept warily around the compound living on garbage. I was glad with it retreated sideways along the open ground instead of falling back into the concrete den. At the doorway, I pulled my pistol and held it at my side with no justification to do so other than that I was at war, it was an enemy bunker, and I expected more unpleasant dogs inside.

“The stairway down was coated with recent dust, but inside, the bunker felt ancient. It was like entering an empty tomb, looted of its valuables but still built to house the dead. I descended the steps into the dim gray, and the walls of the passageway were covered with Arabic. Men leaving evidence that they had gone below. The graffiti thinned with the light as I went down. Underground, there were chambers filled with air that didn’t seem to circulate and floors covered with a filth of dust and fragments of paper. I couldn’t read any of the handwritten notes. The air was cool but smelled of breath, almost damp, mingled with old sewage that had lost the potency of its offense.”

“The air was suddenly gray and full of objects moving at different speeds, some rising and other falling. Pieces of things.”

Or this, a moment later:

“Time slowed. I looked at the men in the truck bed with me and saw mostly blank expressions. Disbelief. It wasn’t until they saw their own blood everywhere that they responded. One marine was missing some fingers and part of his nose, the navy chief had a wound near his waist, and the marine beside me was still.”

Certainly no other work places this in juxtaposition with the experience of appearing as an extra in the television show ‘Homicide.” (“I was informed that I was to play a corpse which was disappointing. I sat shirtless as my death was applied to me.”)

And I think perhaps that no other work in recent years better fulfills the responsibility that Hemingway placed upon all writers, words that were printed on the poster that hung over the author’s novelist father’s own desk:

“All you have to do is write one true sentence.”

With war imagery recalling The Red Badge of Courage (“I walked back to my vehicle, making no imprints in the hardened dirt.”), intertwined with a naturalist’s love of the land (“I have always been a digger. I know the smell of unlit soil.”), Mr. Busch ponders both life and death, which are, after all, the true topics of his book in a manner that is his own acknowledged birthright. As he notes, in mourning his father’s passing, “It is the living task of every artist to suffer the constant premonition of death while drawing plans for immortality.”

Death surrounds us, battlefield or not. As Mr. Busch tells it, movingly, in valediction:

“I have seen cities destroyed in my life, people buried, graves dug up. I have lived outside in the elements. I know that everything is recomposed from preexisting matter, that we are all fragments from earth and life blown apart and gathered up. Pieces of us are from stars and meteors, the ocean, dirt, and the dead. We will not be able to keep these pieces together either, our bodies doomed to be given back to the ground.”

“My mother’s daffodils are blooming, but I am an orphan now.”

Dust to Dust is a work of extraordinary merit. I’ve found no better book of any genre, by any author, so far this year, and likely will not in the months ahead. It is that rare sort of work that will allow you to be jealous of those who have yet to read it, because you know that intense pleasure that lies ahead.

In a world with so damned many books in it, Dust to Dust is one worth noting. Worth reading and rereading. Worth keeping and giving away. Out of the piles of books on the shelves, in the stores, online, by the bed, this is one to be savored. Don’t fail to read it.