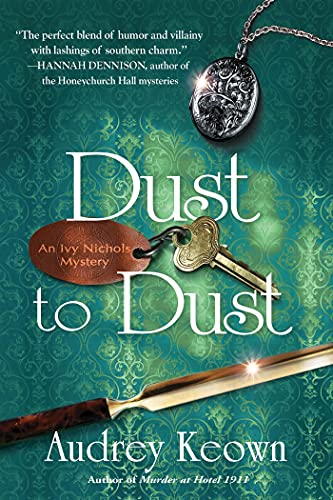 “If the story followed the traditional journey of a cozy, the premise would be a good one. Unfortunately, Keown has placed too many distractions in the story, making it, at times, hard to follow.”

Ivy’s place of employment, Hotel 1911, is the previous home of Ivy Nichols’ ancestors. It has been turned into a hotel—small, quaint, and historical, and is now hosting a conference for the Pittsburgh chapter of the Association for Gravestone Studies.

As the conference gets under way, one of the guests turns up quite dead, and the heavy-handed Detective Bennett cuffs the hotel manager, Mr. Fig, and treks him off to jail. Mr. Fig, of course, has mentored Ivy through the process of learning her job, and Ivy does not believe that Mr. Fig, a kindly, elderly gentleman, could possibly be the one to have seen Renee take her final breath. Not believing that the detective is capable of getting to the true bottom of the crime, Ivy takes it upon herself to dig into the details and turn up the real culprit.

There is no good explanation, no clean motive, for dragging Mr. Fig off to jail. It is just convenient that he was in the right place at the wrong time. Looking for anyone to charge with the crime except Mr. Fig, Ivy immediately zeroes in on Renee’s partner, Dr. Clyde Borough, as the most likely villain and she begins to track his activities.

She focuses her attention on no other possible candidate for murdering Renee. She looks at no other clues, and when she does find something, she does not share it with the police. She apparently knows this is wrong, “I wasn’t surprised that George took issue with my methods of investigation, but I didn’t have the same options the police did for getting warrants and doing this properly.” So the protagonist knows she is doing everything against the law, compromising evidence, violating crime scenes, but apparently doesn’t care.

Add to this the fact that while Mr. Fig languishes in jail, Ivy, with no authority, obtains access to him to question him, and does so in the open jail cell he occupies with all the other lowlife characters that are incarcerated with him, and presumably there are no other police officers or lawyers in sight.

Now, while Keown has developed an interesting premise, she has added so many other issues that the plot gets muddied, and the reader is distracted. For one, there are Ivy’s therapy sessions as a result of her mother abandoning the family years before. Keown shares a therapy session that lasts close to three or four pages to explain the situation; a situation that has nothing to do with the path of the story and takes the reader down a path that is confusing and boring. She throws in platitudes from the likes of Carl Jung, which further confuse the story.

If it is Keown’s goal to give this abandonment as part of Ivy’s character development, that’s good, but it is presented in too much detail.

A second side story is Mr. Fig’s confession to an error in judgement many years earlier, that adversely affected Ivy’s family’s fortune. Again, too much time is spent on this side story without connections or resolution.

Among other sides, there are secret passageways that have nothing to do with the murder, family bodies buried in the garden—distractions once again that take away from the overarching premise.

There is a cadre of other characters settled in for the convention: Velvet and Deena, two old ladies designed to add some color; Dr. Larson, a professor whose relationship with Dr. Boroughs is testy; Tom and Autumn Truman, members of the gravestone society and close to Renee and Clyde; Ivy’s dad with his own set of secrets; and Mr. Wollstone, a cantankerous guest who is most happy when he’s complaining.

Ivy’s love interest, George, is a carryover from her previous book. They have been lifelong friends, and she is just beginning to realize that her attachment to him is more than friendship, but how does she let him know?

Of course, George is becoming interested in Bea, a rather flat character, another hotel employee, and this serves to meddle with Ivy’s interest—a good ploy but not well developed, a missed opportunity for some love tension.

Keown has also created other characters: Doyle, an antagonistic employee who does not like Ivy but it’s not clear why; Clarista, the owner of the hotel who is vaguely developed and remains a minor character throughout. Keown misses another opportunity for Ivy to employ these characters to help her save Mr. Fig, but it appears that the other characters just don’t care about his dilemma, as they seldom discuss him.

The reason for murdering Renee is not clear. In most cozies the reader understands early on why the victim comes to his or her demise, and most often this person is clearly not well liked or carries secrets that the culprit does not want exposed. That does not happen early on in the story. It should also be noted that Detective Bennett barely appears in the story and certainly not to explain his actions toward Mr. Fig.

Keown’s writing style incorporates a lot of parenthetical asides, as if she needs to share some secret with the reader. This is not generally needed because the readers of cozies already get it and don’t need to be told.

It should be noted that while the writing is not strong, Keown does have a few good chapters, in particular the chapter where Ivy is kidnapped and almost meets her own fate, is a good climax scene and a page turner. As with any good mystery, the author should keep the resolution one step ahead of the reader, and Keown does do this, uncovering the real murderer at end.

If the story followed the traditional journey of a cozy, the premise would be a good one. Unfortunately, Keown has placed too many distractions in the story, making it at times, hard to follow.

Probably the most distracting part of the story is the ending. Generally, once the real murdered has been discovered, cuffed, and taken off to jail, the cozy has one final chapter that ties everything together. Although Keown has a good ending to that predicament, she proceeds to drag the story out for another 30 (+/-) pages. It becomes clear that the purpose of extending the story is to provide the reader with some insight into the next Ivy Nichols Mystery. While this ploy is often used in series mysteries to entice the reader to pick up the next story, in this case it could have been done with fewer pages and less detail.