The Duke Is Mine 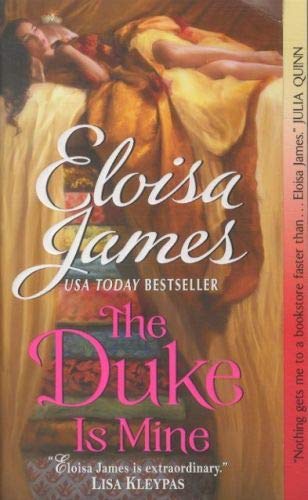 “Olivia is one of the strongest heroines of the year—and readers are sure to delight in her story. . . . the Princess and the Pea aspect is lightly handled. Though an excess of mattresses is present in one scene, the underlying theme is in the defining of a true Duchess. Here’s a hint: It has very little to do with the rules laid out in The Mirror of Compliments.”

Eloisa James continues her recent fairy-tale themed novels with The Duke Is Mine, a re-envisioning of The Princess and the Pea. Much like pizza, even a lesser Eloisa James novel is still worth devouring, and while this one struggles a little in resolution, Olivia is one of the strongest heroines of the year—and readers are sure to delight in her story.

Olivia and her sister Georgina have been raised from the cradle to be duchesses. No matter that their father is untitled (though, their mother will be quick to tell you, connected on both sides to members of the peerage), a boyhood friendship and promise has guaranteed the marriage of one of the twins to the heir of a dukedom.

Thankfully one of the town’s most powerful Dowager Duchesses has published a successful little tome: The Mirror of Compliments: A Complete Academy for the Attaining unto the Art of Being a Lady (though it is rarely referred to in a complimentary manner by either of the girls), and it becomes the cornerstone of their education.

Olivia’s intended, Rupert, is not all that a duke would want in an heir. An accident at birth has left Rupert still a child in many ways, without guile, subtlety, or the tools to successfully run his estates. Therefore, his father is thrilled with Olivia, who has intelligence and wit that, while not strictly lady-like, will nonetheless allow the interests of the title survive to the next generation.

Both families are most eager for the match (though neither of the affianced show any inclination). The only obstacle to their marriage is Rupert’s strong and unwavering desire to go to war and fight for his country. Once he returns, he and Olivia will be married.

Olivia is pleased with the reprieve and happy to accompany her sister to a small house party where, rumor has it, another duke is also feeling matrimonially inclined. The Duke also happens to be the son of the esteemed authoress of The Mirror of Compliments, and any potential wives are sure to be put through a number of tests. Luckily Georgina is as ladylike and refined as her sister is not, and both feel certain that a second ducal match is in the making.

There’s only one hitch in the plan: Tarquin, the Duke of Sconce, is well aware of what will make him a suitable duchess, and is pleased to be led by his mother in this manner. But from the instant he meets them, it is not Georgina he is drawn to, but loud, brash, outspoken Olivia. She is nothing like a duchess should be—she laughs too loud, and too often. She is fond of puns and limericks. She climbs trees. But Tarquin has his own struggles, and Olivia’s straightforward, open manner provides a respite from the confusion society can represent.

However, with Olivia’s betrothal, and Georgina’s growing feelings—not to mention his mother’s strong disapproval—there is more than a question of propriety standing in their way.

The most interesting character in this novel is Olivia, who is faced with an intricate and delicate situation: On the one hand, she has Rupert, who will never gain the mental facilities of an adult; on the other she has Tarquin, who from all descriptions seems to have some degree of Asperger’s Syndrome, as evidenced by his inability to understand, predict, or empathize with the emotions of other people.

Damaged heroes are a mainstay in romance, but it is highly unusual to have two with emotional or psychological issues, and it is a testament to Eloisa James that both are only ever shown in an heroic light, with their challenges represented as only a small portion of the whole that makes up each man. Olivia’s ability to see past the surface—particularly with Rupert, and unlike the majority of the other characters—only cements her as a heroine worthy of admiration.

The major conflict in the plot revolves around the commitments of characters that are inconsistent with their own desires. In order for Olivia and Tarquin to find their happy ending, Olivia’s betrothal to Rupert must be severed, as must Tarquin’s tentative agreement with Georgina. Each will come with its own betrayal, and for Olivia, doubly so, and it is James’s not inconsequential task to make these severings come about naturally, but also realistically in a way that allows the reader to rejoice in Olivia and Tarquin’s pairing without painful undertones.

Ms. James succeeds in an unexpected manner with Georgina, which also fleshes out her character in a surprising way (and perhaps leads toward a sequel), but Rupert’s resolution is less successful. Not only is it an easy way out, it also feels as if Ms. James knows she’s cheated somehow, and delves into excess as an apology to the character.

Finally, the Princess and the Pea aspect is lightly handled. Though an excess of mattresses is present in one scene, the underlying theme is in the defining of a true Duchess. Here’s a hint: It has very little to do with the rules laid out in The Mirror of Compliments.