Duff Bakes: Think and Bake Like a Pro at Home 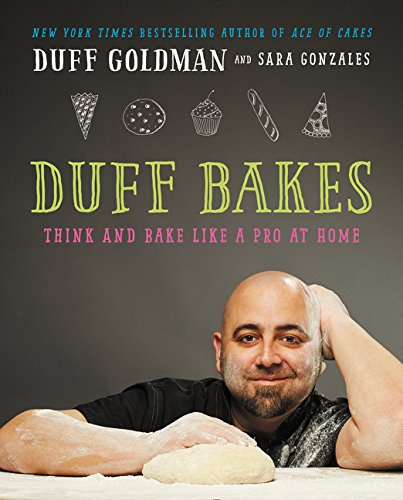 It’s hard to slam a book whose authors really, really want readers to like them. But if you’ve achieved some measure of fame on TV, and you promise bakers they will learn to “think and bake like a pro at home,” readers have a right to expect far more than they get from this book.

For readers who can stand baby-talk cookery writing—yummy, melty, an entire chapter on “goo for cakes”—the authors of Duff Bakes will come across as your BFF-wannabes. The breezy, casual, chatty tone of the recipe headnotes and introductory chapters will set bakers at ease. But bakers, beware.

Because the ease you feel when you start a recipe will evaporate fast. Bakers with a moderate amount of experience will immediately notice the spots where things seem not quite right; new bakers who try to follow the instructions carefully will quickly find frustrations.

Did a copyeditor with baking knowledge lay eyes on this book? The contradictions and missing elements keep popping up—to wit, just a very few examples from among the many:

The opening section on ingredients says the recipes use only extra-large eggs. That’s a bit annoying, since most bakers are likely accustomed to large eggs as the standard, but okay . . . until several recipes list just “large eggs.” Do they mean it, or did the “extras” escape?

That opening section also opines about the importance of not using cheap butter, and offers a mixed message about organic butter . . . but never once do the authors offer the basic of specifying whether they use salted or unsalted butter.

And speaking of butter:  The opening section on techniques discusses how to cream butter—ordinarily done by beating softened butter with sugar until light and fluffy. But then did the directions for lemon poppy seed muffins and apple streusel muffins decide to swap places? Because the poppy seed muffins call for whisking softened butter, while the apple ones call for creaming melted butter.

Or how about a pizza dough recipe (which includes the unfortunate phrase “like a big dough zit”) that seems to call for rolling out dough on . . . well, somewhere, but no instructions at all given for rolling it out . . . putting on toppings, and then, when the dough is loaded down, somehow moving it to an upside down, floured baking sheet or peel to slide the pizza onto a hot baking sheet already in the oven. Good luck with that. Or, the recipe says next, “you can put the ingredients on the pizza after you place it on the hot baking sheet, but then it cools down.” Really, this is how the pros think? And then, the recipe wraps up with this sentence: “If you are confident, load up your pizza on the back of a cool, cornmeal-or flour-dusted baking sheet and then slide it onto the hot surface.” To be brief: Huh?

One of the most glaring, non-thinking-like-a-pro bits comes in ingredient measurements. The opening section on equipment mentions a digital scale—“sooner or later, you’ll come across recipes asking for ingredients in either grams or ounces.” Indeed you will, for sure in “pro” books but also in many amateur ones—but not this one. Not a single ingredient is called for by weight save one box of powdered sugar. But few self-respecting pros—like the one readers are supposed to think like—who need to turn out consistent baked goods would measure otherwise. Compounding the problem, Goldman fails in his discussion of flours to mention how he wants readers to measure it into cups—scoop it? Fluff up the flour with a fork and spoon it into the cups? Run a knife across the top to even it off? Slam the cup of flour on the countertop first to pack it down? Presumably not the last, but for the rest, who knows.

And then there’s a very basic question: Do bakers really need another book of snickerdoodles, peanut butter cookies, shortbread, pumpkin bread, buttermilk biscuits, French bread, challah, pumpkin pie, Key lime pie, etc., etc.? Notice that not one of those said “with a twist”—because these are completely pedestrian recipes, with only rare exceptions, and with nothing that will make readers think like a pro. The recipes don’t provide insights into how they work, and offer only a few suggestions on how they can be manipulated or varied to produce different, experimental, or otherwise interesting and educational results. But they do have peppy headnotes.

Could all of this be overlooked if the food from these recipes still tastes terrific? Probably not, but it seems moot anyway, based on recipe tests. Those lemon poppy seed muffins seemed worth a shot, in case the “whisking” method turned out to be a pleasant surprise . . . but no, neither the texture nor flavor shined here. How about the trumpeted “euphoria” supposedly induced by the book’s collection of blondie recipes? The one with the highest praise—brown-butter blondies—left eaters somewhat short of euphoric. They were fine, but hardly astounding. And other recipes seem to promise little more than a sugar high.

Enough. It’s not fun to slam a cookbook that took its authors time to produce—and of course, the authors are bakers, not writers, by trade. But it’s even less fun to pay for one that promises to have you thinking like a pro, only to offer even less than many books by unknown amateurs.