Drone Warrior: An Elite Soldier's Inside Account of the Hunt for America's Most Dangerous Enemies 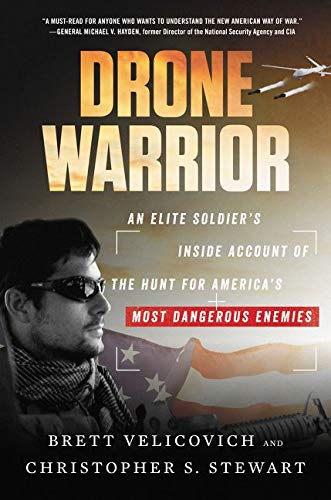 “a captivating portrayal of an American warrior at the very cutting-edge of the War on Terror.”

The War on Terrorism has been one of the longest conflicts in American history. Since 2001, U.S. forces have been fighting on the battlefields of Iraq and Afghanistan, along with much smaller engagements in places as far-flung as Somalia, Nigeria, the Philippines, and Cameroon.

In this time, war, or at least the American way of war, has changed dramatically. Conventional operations featuring armor, infantry, and air support have given way to fusion warfighting. Unmanned Aerial Vehicles, otherwise known as drones, are the most visible tool used in this new hybrid way of war.

Author Brett Velicovich spent several years as one of the top intelligence men in the U.S. Army’s highly secretive Delta Force. Unlike “operators,” with their customized rifles and their daring, on-the-ground missions, Velicovich was a very different type of special soldier. Pale, thin, and frequently sleepless, Velicovich went to war inside of the Box—a hot, cramped, and plywood container armed with laptops and monitors. Rather than rifles, Velicovich and his teams used UAVs to hunt down the world’s most wanted terrorists. Sometimes the drones provided eyes in the sky for operators; other times drones were the killing agents that leveled houses and evaporated the bad guys with Hellfire missiles.

Unlike how they are depicted in the mainstream media, drones are neither omniscient weapons capable of winning wars by themselves, nor are they heartless and unthinking agents of American imperialism. A drone is only as good as its operator, and operators are only able to pull off their spectacular missions thanks to excellent intelligence.

Drone Warrior is a highly personal memoir that still manages to be almost all action. Readers only get but the briefest glimpse into Velicovich’s prewar life. On 9/11, he was just an ordinary college student at the University of Houston. However, watching and digesting Al-Qaeda’s attack convinced Velicovich that there has to be something more to life than just finding a nice job in corporate America and settling down to a wife and kids. He went to find this other life in the U.S. Army.

After a few deployments to Afghanistan and Iraq, including one where Velicovich’s unit was on the receiving end of a rocket attack in Baghdad’s Sadr City, Velicovich made the acquaintance of Mr. White in 2006. This Mr. White introduced him to the highly secretive world of Delta.

Velicovich describes this screening/training in almost cinematic terms: “When I got close to the single door at the end of the hall, walking blindly into it without knowing exactly what I was getting into, I stopped and turned around, hoping to get one last nod of approval from Mr. White before I knocked and went in.”

Once on the other side, Velicovich became the master of the Box—a very lean, cereal-eating drone warrior who helped America to capture or kill the top dogs in the ISI, or Islamic State of Iraq. This group was almost down and out in late 2010 thanks to the work of men like Velicovich.

Unfortunately, America’s exit from Iraq in 2011 and the outbreak of civil war in Syria allowed the ISI to morph into ISIS, the world’s most dangerous terrorist organization. In “The One Who Got Away,” Velicovich shows just how frustratingly close the U.S. came to killing Abu Bakr al-Baghdadi years before he would lead ISIS back into Iraq.

In the end, Velicovich provides a very honest account of how all of this death consumed him. The war became Velicovich’s life until it started to eat at his relationships. When he left Delta in 2010, Velicovich found himself still searching for the excitement and purpose of war. He did not find in Somalia or Nigeria, but he did eventually find it in the Great Rift Valley of Kenya. These days Velicovich uses drones to stop poachers from decimating African wildlife.

Drone Warrior is a captivating portrayal of an American warrior at the very cutting-edge of the War on Terror. It is also the story of a normal man impacted by continuous warfare and the difficulties of conforming to civilian life. This is a must read for anyone looking to better understand our modern warriors.