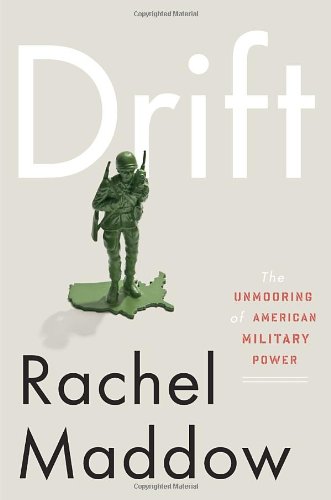 “[certain characterizations in the book ought not] preclude serious consideration of Dr. Maddow’s assertion that the unmooring of America’s current national security decision making process further and further away from civilian life and political debate is ‘not done and forever though. We can go back. Policy decisions matter. Our institutions matter. The structure of government matters. They can all be changed. . . . If specific decisions in time landed us where we are today, we can unmake those specific decisions. We can walk them back.’”

A potential reader spotting this title—Drift: The Unmooring of American Military Power—for the first time might reasonably ask—“unmoored from what?” The answer, as argued by Rachel Maddow, host of MSNBC’s “The Rachel Maddow Show” is that the exercise of American military power has been unmoored from the process written into the Constitution by the Founding Fathers who intended to make going to war beyond America’s own borders difficult.

According to Dr. Maddow—who was a Rhodes Scholar and holds a doctorate in political science from Oxford University—the Founding Fathers intended that the United States would rely on “citizen-soldiers” rather than a standing army to provide for the defense of the country in ways that the American public clearly understood and supported through broad personal sacrifice.

Yet the fundamental shift of power from Congress to the President to dispatch military forces overseas, along with an all-volunteer military, a militarized CIA, and exponentially increased reliance on private security contractors, has unmoored the exercise of United States’ power from its historical roots in the sacrifice made by the entire American population.

As she readily admits in the pages of this book, that is a small “c” conservative argument.

Until recently, Dr. Maddow’s thesis would almost certainly have been relegated to the periphery of political debate, along with the foreign policy prescriptions of Ron Paul, if not recently thrust into mainstream discussion by the news that NATO personnel had distractedly incinerated an undisclosed number of defaced Korans and the alleged killing of 16 civilians by a United States’ Army staff sergeant in Afghanistan during the first months of 2012.

During the March 18, 2012 broadcast of NBC’s “Meet the Press,” the discussion of those incidents prompted David Gregory, the host and moderator, to ask “What is a reset of our foreign policy and our national security look like in the face of, you know, emerging threats . . . if the Army is so tired, if our troops are so tired, so is the country. . . . [and the] strains . . . [on] politics and presidential leadership.” This book is an important contribution to any attempt to address that issue.

The essence of Dr. Maddow’s critique of America’s current “national security” decision-making process is that “we’ve pushed military experience further and further away from civilian life . . . [and] political debate.”

As should be expected of a Rhodes Scholar with a lengthy career in radio and television, Dr. Maddow has written a very informative and entertaining book. Focusing on the fact that “by 9/11, the war-making authority in the United States had become, for all intents and purposes, uncontested and unilateral: one man’s decision to make,” the book’s prologue, eight substantive chapters, and an epilogue are written in much the same colloquial language heard by viewers of her MSNBC cable program.

A list of her chapter subtitles provides some idea of her writing style: G.I. Joe, Ho Chi Minh, and the American Art of Fighting about Fighting; A Nation at Peace Everywhere in the World; Let ‘Er Fly; Isle of Spice; Stupid Regulations; Mylanta; ’Tis of Thee; Doing More with Less (Hassle); and “One Hell of a Killing Machine.” The book is also studded throughout with stories of scandal and outright stupidity on the part of those who wield the projection of American Power beyond United State’s borders.

And like her MSNBC broadcasts, much of Dr. Maddow’s commentary meets academic and journalistic standards of objective reporting. But not all of it; this book is explicitly written from a partisan perspective.

Indeed, as a self-described “leftie,” Dr. Maddow explicitly places her argument within a “liberal”/“conservative” split. And that split is reinforced by the use of pejorative adjectives applied to such personages as Dick Cheney, Donald Rumsfeld, and others like Ed Meese and President Ronald Reagan. That is an unfortunate distraction for at least four reasons.

Second, she declares—although not until page 204—that “. . . regardless of the culpability of the Paul Wolfowitzes and Donald Rumsfelds and Dick Cheneys in starting the Iraq War,” there is a more fundamental and important “national culpability for the fact that we have, without any real debate or thought, settled into a way of waging war that ensures minimal political pushback. . . .”

Third, the use of such prejudicial characterizatons will no doubt reinforce already formed views of her opinions as a “leftie.” Partisans who are predisposed to disagree with whatever argument she might present are unlikely to pick up her book anyway. But those few partisan opponents who might nonetheless take a look are likely to be put off by the gratuitous use of those negative characterizations. And that would be a shame because they are likely to find much in Dr. Maddow’s argument about which they would agree.

Fourth, her partisan supporters are likely to miss the more profound messages in her analyses as they focus on the entertainment value of the villainous portraits of their political opponents.

Nonetheless, it can be hoped that such responses will not preclude serious consideration of Dr. Maddow’s assertion that the unmooring of America’s current national security decision making process further and further away from civilian life and political debate is “not done and forever though. We can go back. Policy decisions matter. Our institutions matter. The structure of government matters. They can all be changed. . . . If specific decisions in time landed us where we are today, we can unmake those specific decisions. We can walk them back.”

1. “Whenever we start a new [war], . . . we should raise the money to pay for it, contemporaneously ‘Freedom isn’t free’ shouldn’t be a bumper sticker—it should be policy.”

2. “Let’s do away with the secret military. If we are going to use drones . . . the Air Force [rather than the CIA, Special Forces, or private security contractors] should operate those drones, and pull the trigger. And we should know about it. . . .”

3. “Let’s quit asking the military to do things best left to our State Department, or the Peace Corps, or FEMA. And let’s please stop expecting military leaders to make judgments and decisions about policy. . . .”

5. “Let’s wind back the privatization of war and the military’s dependence on contractors for what used to be military functions. . . .”

6. “. . . we ought to realize by now . . . that deploying the US military, or dealing billions of dollars a year of arms to our ally of the moment, is not always the best way to make threats go away. Our military and weapons prowess is a fantastic and perfectly weighted hammer, but that doesn’t make every international problem a nail.”

7. “Let’s ensure that our nuclear infrastructure shrinks to fit our country’s realistic nuclear mission. . . . Let’s up the way-too-slow decommission process and shrink our nuclear inventory before” maintenance and rehabilitation issues deteriorate even further.”

8. Let’s “. . . take decision making about war out of the hands of the executive. . . . Republicans and Democrats alike have options to vote people into Congress who are determined to . . . assert the legislature’s constitutional prerogatives on war and peace.”