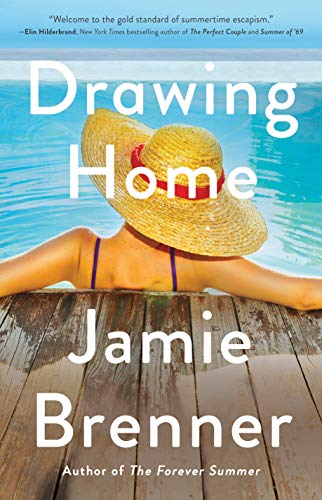 Jamie Brenner started her career in New York City working for Harper Collins, Barnes & Noble, and Vogue before venturing out to write her own novels. Thank goodness she did! Drawing Home is a fully engrossing tale of art, love, life, and the power of friendship.

Brenner's novel centers around Sag Harbor with its outward luster of an idyllic vacation town. Underneath the surface are Brenner explores the lives of Emma, a single mother, and her daughter, Penny. Her father floated through town one summer as an actor and even though they married, floated back out of their lives. Emma and her daughter were befriended by Agnus and Celia. When Celia passed she made Emma promise that her husband Agnus would not be left alone. All three live together in a fixer-upper house on the not-so-fashionable-side of Sag Harbor.

The American Hotel is a fixture of Sag Harbor as well as many other buildings. Unfortunately, the movie theater and other main street buildings were lost in a fire. The citizens rally around their own, and there are fundraisers and plans to rebuild. The summer tourist season is gearing up in Sag Harbor and it's all hands on deck.

Only Penny as a teenager doesn't fit in, has problems of her own, is seeing a therapist she doesn't think is helping her, hates her job at the historical society with Agnus, and her best friend just died. Her best friend was an octogenarian, Henry, who had a regular bar stool at The American Hotel where Emma worked and helped Penny explore her talent for drawing. The unlikely pair was one of the few bright spots in Penny's life.

Sag Harbor is always more complicated then it seems under the surface. Henry, it turns out, was a famous painter who built a magnificent house and filled it with his art works. And just happened to leave everything to Penny in his will when he died.

His death triggers a windfall for everyone involved and not all of it positive. Penny is shot to stardom as a teenager who can now rub elbows with the rich kids. Instead of helping stabilize her emotional problems, it exacerbates them and she finds chemical ways to help her cope. Emma's family life has been turned inside out. Her social standing has shot up, and people who wouldn't have thought of talking to her before are now eager to get her attention. Angus doesn't feel comfortable moving to the new house.

During all of this in swoops a figure from Henry's past. Bea and her assistant Kyle invade Sag Harbor to claim all of Henry's possessions and manage his estate. Bea discovered Henry when he first came to New York City and managed him until he set up residence in Sag Harbor. Kyle doesn't approve of what Bea is doing and had decided to quit. Then he runs into Penny on the street and changes his mind. He'll give Bea two weeks to straighten everything out.

Bea thought Henry had quit painting then finds out while exploring Sag Harbor this is far from the truth. Henry didn't quit. He found inspiration. The secret she uncovers about Henry and his work sends the story into a mystery that will take the will of all the characters to solve.

Fantastic writing in a wonderful small-town setting makes this a satisfying summer read. Jamie Brenner has taken the lives of people from different worlds and woven them together to solve a mystery and tie everything together for a gratifying ending.