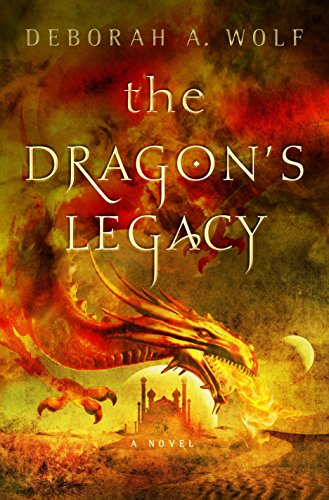 “It was a small gesture of defiance, a candle against the dark night, but later Jian would remember that moment and think, That is when it really began.”

In her intricate epic fantasy debut, Deborah Wolf pulls readers into harsh landscapes, challenging climates, political intrigue, subtle and unique magics, and treachery that will shift the fate of a world. Against an otherworldly tableau of deserts, tundras, dense forests, burial grounds, forbidden cities, and opulent palaces, the nation-states of Atualon, Quarabala, Zeera, and Sindan vie for survival and supremacy.

Following a destructive war one thousand years in the past, Atualon’s king wields powers that cannot be challenged. He has both the ability to balance the energies soul, spirit, life, and death in ways not possible through other systems of magic, and the war-forged right to rule over his neighbors.

Legend holds that only through his magic can a great dragon remain asleep and separated from her mate. If that dragon ever wakes, she will tear the world to pieces.

Ka Atu, the Dragon King, has a reputation for both brilliance and cruelty. He also has some serious problems. He’s dying, the only woman he ever loved abandoned him years ago, and their daughter, the only surviving heir who might possess the magic needed to keep their world whole, is missing. In a desperate but very calculated gambit, he sends his last living son Leviathus in search of the girl, knowing Leviathus will have to outrun assassins, travel through the most hostile climates on the planet, and survive the wrath of the most dangerous dreamshifter known in modern times.

In matriarchal Zeera, a proud, ancient, and nomadic race works to repopulate following that distant, disastrous war. They have taken in the dreamshifter Hafsa Azeina and her daughter Sulema, despite the risk of sheltering a sorceress thought to be both murderous and mad.

Many of the Zeeranim form bonded relationships with the vash’ai, also known as kin and descendants of the first races, saber-toothed cats who fight side-by-side with them in any battles engaged. Hafsa Azeina uses her bonded vash’ai, her dreaded magic, and her position within the Zeeranim to protect her daughter Sulema.

On the verge of achieving her life’s dream of becoming Ja’Akari, one of the fierce warriors who defend Zeerani lands and people, Sulema has no idea of the magnitude of the secrets Hafsa Azeina is keeping from her. As she completes the ceremony to become the warrior she has always been in her heart, fate comes for her in the person of her half-brother Leviathus. When Sulema finally understands her connection to the Dragon King, her future grows uncertain and so dangerous that not even Hafsa Azeina may be able to protect Sulema from betrayals both distant and very close at hand.

Meanwhile, in Quarabala, a desert land with heat so fierce cities must be built underground, ancient and dangerous cult magic is afoot. Near its boarders with Zeera, fearsome, mystical, and homicidally dangerous Bonelords are stirring. Far across mountains and tundra, in Sindara, laws and traditions tear a youth away from his mother and his beloved home next to the sea. Jian has magic he did not ask for and does not understand. Because of this fact of birth, he faces a long and dangerous training program in the Forbidden City. If he survives the heartless induction into service, his power within his own nation may one day grow to be unlimited.

How these many pieces will connect remains unknown at the end of this first installment, but it is clear that as these disparate pieces pull together, the outcome will be world-shattering. Wolf’s style of storytelling, more nomadic and episodic like the world and people she has created, may be initially challenging for some readers, but the tale’s mysteries, the world’s grandeur, and vivid, strong characters will reward those who persevere. Fantasy fans who crave stories that eschew traditional gender roles, as well as those who find Celtic-analog cultures wearisome, will be pleased with this intriguing new offering.

Susan Vaught's most recent children's book is the 2016 Edgar Award-winning Footer Davis is Crazy. She is also a psychologist who is Director of Psychology at a large state psychiatric facility in Kentucky.