Dragongirl (The Dragonriders of Pern) 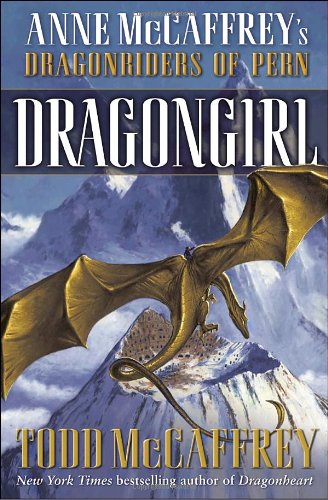 Reading the Pern books isn’t like it was when Anne McCaffrey wrote them.

While it’s good to see the world still telling us its stories, Todd just doesn’t have his mother’s gift for clear and emotionally entangling writing: Dragongirl reads alternately like a weird YA version of the series and overambitious fanfiction making it difficult to get through. And then, all at once about three quarters of the way through, it’s like the book finally finds its feet. It feels more defined, the word choices change and become more varied, and, somehow, it ends on a triumphant and tragic note worthy of the series.

This is Todd McCaffrey’s sixth book, and the third one written solo as he’s taken over the series, but so much of it reads like a muddled first novel. There are numerous conversations involving too many people with too-similar names who all talk with the same inflections and word choices, regardless of their differing histories.

A lot of the physical action doesn’t make sense, sometimes because it feels like important parts are missing, sometimes because it’s like people have access to information they shouldn’t know and reach conclusions that aren’t logical. Most of the characters are young, some extremely so, but there’s little behavioral difference between them and the older characters they interact with.

There are glimmers throughout of the solid story this book is built around—new young Weyrwoman Fiona has to hold the dragonriders together as their numbers fall and hope seems increasingly lost—but in those first three quarters of the book, those glimmers only serve to point out that so much of the book is lost in blurry events, sometimes nonsensical logic, unexplained references to past events that rely too heavily on a strong and recent reading of the previous books, a vast cast with little to define or differentiate them, and a cloud of action tags that consist almost entirely of nods and running. It’s irritating to read, to say the least.

Even so, there’s heart there. Fiona makes sense and manages to be quite likable, even as she mopes over a functioning polyamorous relationship and manhandles everyone into the positions she wants them in so the story can continue. Kindan and Lorana are beautifully tragic, and T’Mar is charming and interesting. All the other characters that seem so important in the beginning—Xhinna, Terin, all the little girls introduced throughout the first half—wind up superfluous by the end. The point of the story is that the only way to save Pern is to do the unthinkable, and by the end, the main characters are strong enough and clever enough to do it . . . it just takes a hideously long time to reach that point of clarity and cleverness.

After the conclusion, some of the failings are forgivable as many of the weirder plot points are the result of complicated time-travel and therefore only clarified when they reach the other half of the story, but even then, the most important one happens after the half-way point of the book, renering unnecessary much of the plot of the first half .

This is perhaps the middle of a new series of Pern books, and it jumps off directly from the last book and leads immediately into the next one: the classic downfall of every second movie in a trilogy, but not really acceptable in a book, where each volume, though carrying on the overarching storylines, should have a defined arc of its own. Halfway through, it felt as if it was all lost and that realization is almost enough to make a reader drop the book, because surely nothing they do can change the fact that we know how it will turn out. The best part of that surprising end is the revelation that there’s more to what’s going on than the characters are privy to . . . though it would have been nice if there were a bit more clarification to those of us who are reading it and can be told more than the characters know. Half the fun of reading is trying to figure out the story ourselves, and the hints were given at the wrong times.

There is this to be said, though: The ending is great, if too quickly resolved after the long buildup, and it more than reaches the goal of making this reader want to read the next one, which should, after all this set-up, get to the point much more quickly and be a better story.

All in all, Dragongirl is difficult to muddle through. It’s not the best in the series, but it’s a necessary setup for the next book. Let’s hope that one is a bit more satisfying.