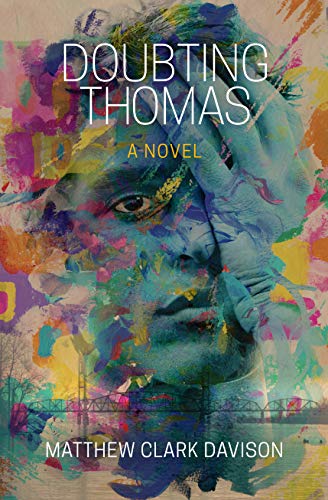 “Matthew Clark Davison’s Doubting Thomas is an absorbing story of a gay man who finally learns to love.”

Matthew Clark Davison’s Doubting Thomas is an absorbing picture of a man who has a mid-life crisis thrust upon him that teaches him how to truly love the people around him. It is also a disturbing picture of the limits of the liberalism so many people pride themselves on having.

The year 2013 is the one in which 40-something Thomas McGurrin finally figures out who he is. Thomas has always considered himself openly gay but also craved the approval of straight people. When he was in high school, he hid while witnessing the brutal beating of an effeminate student. Thomas feared above all being seen as gay and, with his athletic skills, he was adept at passing.

By the time he accepted a position at a fancy country day school in Portland, he considered himself out and proud. He was hired, not in spite of being gay, but because he was gay. His appointment helped make the school seem to be a bastion of liberalism in politically correct Portland. He becomes best friends with the Black female head of school (Thomas’s close friends are all women), and for 12 years is a popular fourth grade teacher. Lonely mothers love to invite him over for a drink and safe flirtation.

For 12 years, Thomas is happy at the country day school but has no personal life. He pines for Manny, his lover of two years, a mixed-race German scientist on a temporary research visa. However, when Manny’s visa ran out, Thomas cut off communication with him. Marriage was not yet a possibility (Oregon did not have same-sex marriage until 2014). Being a beloved teacher in this rich kids’ school was more important than a personal love life.

Then came the experience that led Thomas to see more clearly his relationship with the people whose favor he so coveted. At a fundraising party, the father of one of his students kisses Thomas in a closet (how appropriate!). Did the wife see this? Shortly after, she falsely accuses Thomas of molesting their son. Even after being exonerated, he is forced to resign because wealthy parents threaten to remove their children and their money from the school. To these supposedly liberal parents, Thomas is gay, so despite proof to the contrary, he must be a child molester. Out of some misdirected sense of loyalty, Thomas does not reveal the forced embrace of the boy’s father. Once the anger finally hits Thomas, he follows Jerome, his lawyer’s, advice and forces the school to settle for $2 million in personal damages.

Thomas moves backward before he moves forward. He moves back to San Francisco and his closest female friend, finds an apartment and a job in a trendy retro furniture shop, and buys a motorcycle.

2013 is also a year of crisis and healing in Thomas’s family. He is the middle son between an over-achieving older brother and a younger brother who is a recovering addict and has received a cancer diagnosis. Thomas’s well publicized crisis at the country day school leads to the development of closer and more honest bonds with his parents and siblings.

Matthew Clark Davison has woven a fascinating story with well-drawn characters. As Thomas faces an uncertain future, he jumps back into past memories that show how his shame at being gay and his cowardice has distorted his relationships with family, friends, and lovers. Davison, a professor of creative writing, has a poet’s gift for striking metaphors. Sometimes this reader felt that Davison offered too much detailed information—that a bit more pruning would have made his story even more powerful.

The author definitely has points he wants to make. At its best, he conveys his ideas through characters and well-crafted situations. However, some of the crucial events in the last third of the book seem a bit contrived and occasionally a supporting character becomes unconvincingly preachy.

There have been a number of fine recent novels that depict the inner life of a gay man in the process of finding himself—works like Brian Washington’s Memorial and Jake Wolff’s highly imaginative The History of Living Forever. Matthew Clark Davison’s Doubting Thomas is an absorbing story of a gay man who finally learns to love.