Double Cross In Cairo: The True Story of the Spy Who Turned the Tide of the War in the Middle East 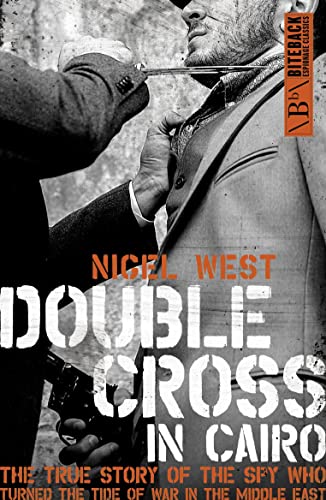 As more and more documents and files on intelligence and counter-intelligence operations are declassified as time marches on, the public begins to learn many of the things that go on behind the scenes of their government when it comes to espionage. In particular, in recent years, it has come to light that strategic deception has taken a prominent place in the toolbox, perhaps even more so sometimes than the actual accumulation of actionable intelligence on enemy plans and intentions.

The concept of strategic deception received a considerable boost in World War II with the employment of the so-called United States “ghost army” in the European Theater of Operations which deceived the Germans with fake radio communications, division patches of nonexistent formations, dummy tanks, guns and trucks, etc. and, most prominently, into thinking that the landing at Normandy on D-Day was just a feint or diversion and that the real invasion would occur at the Pas de Calais.

Joining alongside the United States in these operations was the United Kingdom which, fighting virtually alone for the first two years of the war, engaged in its own efforts to fool the Germans in the overall North African/Middle Eastern Theater as it attempted to deny them the critically important Suez Canal and the possibility of overrunning the equally critical oil fields of the region to fuel their war machine.

Author Nigel West is a military historian who specializes in intelligence operations. His list of previous publications in this category is impressive and lengthy, and his research into the subject of this monograph demonstrates his knowledge of and access to the sources which tell the story of one of the most successful deception agents who served in World War II.

As with many such operatives, Levi Renato (code name Cheese) was a rather quixotic man with the usual taste in women and the other finer things in life. However, he was also driven by a need for adventure and excitement and the desire to help the Allied war effort in way any he could inasmuch as he was also motivated by being part Jewish.

Deceiving the Germans over most of the war took considerable talent as they could compare and collate his information with that gathered from other sources so his veracity and reliability could be questioned at any time. His “network” of fictitious agents continued to provide information even when Cheese ran afoul of the Italians and was arrested, convicted and incarcerated in a camp for political prisoners.

His sometimes accurate, sometimes false, sometimes feasible and credible tidbits of intelligence managed to keep the Germans guessing and, at one point, even thinking that the Allies would invade in the Balkans and Crete and had a much larger order of battle than in actuality. It was indeed a case of walking on thin ice 24/7.

As with any publication where espionage is concerned, the trail can be rather convoluted and confusing with myriad operational and agent code names and acronyms. So be prepared to pay close attention and be sure to consult the glossary of terms provided as well as the list of dramatis personae in order to be able to follow the story.

Having said that, it is necessary to include some criticisms. Conceding that many “spies” prefer not to be photographed, there is only the sole 1949 photograph of Renato included of any of the personages mentioned in the text and none of any of the locales where much of the story takes place. Indeed, there is no map of Cairo, Egypt, or the Middle East.

Although the author's research is extensive, there are no notes. Consequently, one is left to ponder the specific source of individual pieces of information. Finally, there are places in the narrative that are repetitive of something having been referenced on a previous page. This is usually when British handlers are quoted in their updated reports on the ongoing operations and there are quite a few of those so quoted. In any event, it seemed somewhat unnecessary to the flow of the text.

So if one is prepared to refer to the program to tell the players apart, this is an object lesson in how to run a successful wartime strategic deception operation and easily explains why such files were kept classified for so many years.