Don't Try to Find Me: A Novel 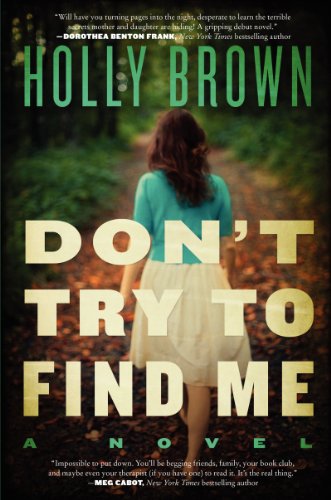 “In Don’t Try to Find Me, Brown, a practicing family therapist, offers a nuanced portrayal of the complex dance of marriage and familial relations.”

Author Holly Brown drops us into the center of the action in her novel. “Don’t try to find me. I’ll be okay. I’ll be better. I love you. There it is on the white board . . .” Brown writes on page one. Rachel and Paul Willits’s daughter, Marley, 14, has run away.

Rachel is distraught, but not as distraught as might seem appropriate under such circumstances and not for the obvious and logical reason: her daughter’s disappearance. Rachel, it turns out, has her own issues (an unhappy marriage and an addiction to anti-anxiety medication to name two) that she desperately wants to keep hidden. Her secret life causes her at least as much angst as her missing child.

In Don’t Try to Find Me, Brown, a practicing family therapist, offers a nuanced portrayal of the complex dance of marriage and familial relations.

She also shines an unsparing light on what it might be like to see your life, or what others make of it, played out on the Internet, as Marley’s father launches a FindMarley Facebook page, Twitter account, and the website FindMarley.com, complete with photos, phone numbers, links, and downloadable flyers. He handles the media, which soon swarm like locusts, while Rachel tries to hide.

Brown chose to write her novel in the first person and mostly in present tense, alternating between the voices of Marley and Rachel. Brown is at her best when presenting Marley’s side of the story, which she does primarily through journal entries. While they deflate some of the tension for the reader, these earnest and detailed recordings of a confused, 14-year-old runaway’s every thought, concern, action, and question are believable and compelling.

Rachel’s sections work less well. Her ceaseless self-examination and overthinking of every move, emotion, and thought become tedious. A little less rumination and self-scrutiny would have provided readers with ample opportunity to glean that Rachel has issues and spared them the frustration. Too much introspection slows the action and makes Rachel seem overly self-absorbed.

The males in Brown’s novel, as presented by Rachel and Marley, come across as predatory, controlling, overbearing, and deceitful. (And some truly are.) When Rachel’s husband Paul is revealed to have a softer, more vulnerable side, readers might find themselves again frustrated with Rachel, this time for not having seen this in her husband earlier and thus even more impatient with her perseveration on her own problems.

Early in the novel, Rachel accuses Paul, with a little prompting from a psychotherapist, of being a narcissist (one who is excessively self-involved and preoccupied with power and prestige, vain, and unable to empathize with others to see the damage they cause). Rachel, it seems, fits that diagnosis far better than her husband. But perhaps that is precisely Brown’s point.

Marley has for years engaged in what she calls “opposite speak.” In her world this is not lying, it’s simply saying the opposite of what she really means. Is Brown, through her novel, engaging in opposite speak? “Don’t try to find me,” Marley writes in her note. Is that a cry for someone to come find her? Ironically, Marley, of all the characters in this novel, seems the least lost.

The book has a few deus ex machina moments: cell phones dropped and computers conveniently left unattended, allowing characters to access email accounts and surf the Internet for information, but readers will likely forgive this (it happens, right?) in their eagerness to unravel the mystery, which really gets rolling in the second half of the book when Rachel finally exorcises the demons in her head.

Brown doles out the events leading up to Marley’s disappearance in the form of Facebook and Twitter postings. This serves not only as a clever commentary on how interpersonal communication has devolved in our culture, but will likely send parents scurrying to sign up for any social media accounts they don’t already have to better monitor their children’s activities.