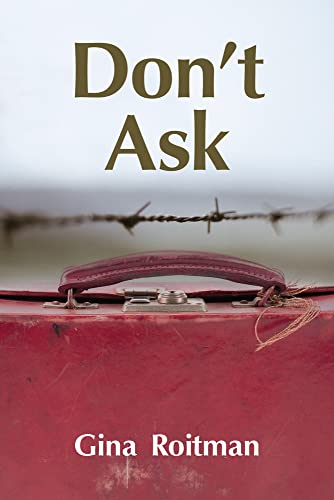 “’Over my dead body will you go back to that land of demons and monsters. . . . Did you learn nothing from the past?’”

Part mystery, part historical novel, part love story, Don’t Ask delves into a question that still resonates nearly 80 years after the end of the Holocaust: For how many generations does guilt continue?

“If we allow the past to be the path to the future we will forever be walking in circles,” pleads Max Mohr, a German real estate broker and the son of an SS officer, who has fallen in love with Hannah Baran, the daughter of two Jewish Holocaust survivors, as the story begins in August 2000.

The book explores this important question with an intriguing plot and appealingly original characters, but it is marred by some hard to swallow twists.

Hannah’s parents, Barak and Rokhl, have never talked about how they survived the Holocaust, except to say that Barak swooped up Rokhl in a blanket when his Russian regiment liberated Auschwitz. Indeed, in a nice touch, Rokhl literally doesn’t talk at all, communicating with her daughter mainly by handwritten notes. “What good comes too easy often goes very fast,” she writes after Hannah briefly wins the top ranking in her eighth-grade class.

Max and Hannah first meet through a business deal. Max’s wealthy client in Germany inexplicably wants to buy a tract of largely wilderness land about 200 miles from Montreal, owned by Hannah’s client. (This may be the only mainstream novel where both partners in a romance are middle-aged real estate brokers.)

However, when Hannah tells her mother that she will be traveling from her home in Montreal to Germany to negotiate the strange purchase, Rokhl explodes: “Over my dead body will you go back to that land of demons and monsters. . . . Did you learn nothing from the past?”

Within a day, Rokhl is dead, an apparent suicide. Hannah is obviously shaken, but she throws herself into her work, and less than three months later she’s en route to Germany.

For two intelligent, divorced, urban professionals, both with direct ties to the Holocaust, Hannah and Max are unbelievably naïve about romance as well as World War II.

After a long dinner and a glass of wine with Max—during which she leans over the table, gazing at his dimple, “entranced by its movements”—Hannah muses to herself, “And then, there was Max Mohr. What she wanted from him was still a mystery, but thinking about it made her fingertips itch.” Not a mystery to the reader, that’s for sure.

More troubling, the plot partially relies on the cliché: the cache of newly discovered papers—in this case, shoeboxes full of notes from Rokhl—that the protagonist for no apparent reason fails to read throughout most of the book. This incuriosity is particularly unbelievable, because Hannah frequently complains about how little she knows of her family’s history and how she has no one to ask because all her relatives are dead.

Still, this novel’s overall theme redeems its narrative weaknesses. Perhaps the most compelling commentary is Hannah’s unvoiced reaction, when Max asks where her mother and father came from:

“The irony was that he could ask her where her parents were during the war, but she had no such license. She could not very well enquire, ‘And what did your father do in the war? Where was he stationed? Did he murder any Jews?’”

Author Gina Roitman–-an essayist, poet, short-story writer, and award-winning documentary producer who, like Hannah, was born to Jewish Holocaust survivors in a postwar displaced-persons camp—deserves credit for posing these challenges in such a readable narrative.