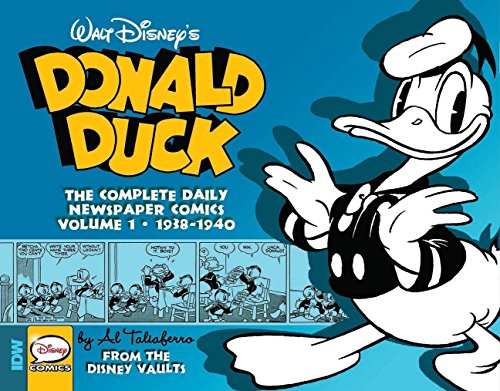 This is Donald Duck as a star. This is Donald at the height of his ability to make us laugh as drawn by one of the best ever, Al Taliaferro.

Over the course of the two years featured in Walt Disney’s Donald Duck: The Daily Newspaper Comics Volume 1, 1938-1940 we encounter Huey, Dewey, and Louie. We also meet any number of dog-cops more than willing to put the little sailor duck in jail for even the slightest infraction. But this is Donald’s show.

In over 700 beautifully reproduced daily newspaper strips the Duck spins, swirls and swats, smashes and slams in a delicate balance of spastic slapstick and ballet that equals Keaton, Lloyd, and Chaplin.

We all want to jump and wave our fists and scream and rant and rave and yell just like Donald does when something really, really gets to us. We would love to operate without any filters.

Donald could care less about social conventions and decorum. Dammit, when the Duck is upset he has to let it out! And we love to watch him do it. It doesn’t matter where you are from on this planet. We all get upset and we all get frustrated. No one is better at getting upset and then realizing that he may just be the fool than Donald.

This is actually one of the keys as to why we like Donald so much. But the simplistic image of him as an out of control, temper-fueled wild duck leaves him two-dimensional.

What Taliaferro does in the newspaper strips is add that third dimension. His line is so perfect that with just a raised eyebrow or maybe tightly squinted eyes he can show us what is in the heart of Donald.

As many of these dailies remind us, Donald not only has a wicked sense of humor that usually costs him, at the very least, his dignity. The Duck is also incredibly kind. He will stop to help a stranger in need or lay a coat across a puddle for a lady.

At his core, he is a massively positive being with a wonderful can-do attitude that we can’t help but admire. It is no wonder that the public took to him from his very first appearance in the 1934 Silly Symphony cartoon, The Wise Little Hen.

By 1938, the year these solo strips debuted, he was the most popular animated character in the world. While his voice is one of the reasons people loved him, it was just one aspect of who he was. Donald Duck didn’t need language to make anyone laugh. All he needed was an uncooperative car jack. Or a garden hose.

That the strip exists at all is a testament to the artist’s tenacity and even more, to his artistic skill. In his opening essay, Disney historian David Gerstein tells how Taliaferro’s deep commitment to the idea that Donald could be a successful solo strip finally paid off.

Taliaferro had started at the studio in 1931. Both Walt and Roy immediately saw his talent. After being hired, he began inking the Mickey Mouse daily and soon, he moved over to the Silly Symphony Sunday Page. The backgrounds he created for a particular sequence featuring Bucky Bug, a job anyone else would have phoned in, get him noticed.

Donald took a lead role in the Silly Symphonies Sunday Page that lasted 14 months. Over time, the character sharpened and became more defined. As Gerstein says, “he began to grow up.”

This is where we pick up with the debut of Donald’s daily in 1938. Taliaferro has been drawing the character for years and the public absolutely adores him on the big screen. The artist’s graceful and detailed artwork makes every gag land.

When you read these strips as they appear in their original size, the beauty of Taliaferro’s line is astounding. Every single panel he draws absolutely matters to the end result.

Like Charles Schulz and his work in Peanuts 20 years later, Taliaferro never wastes a single inch of space. Especially with what he chooses to leave out. He knows full well that there is nothing in the world like seeing Donald lose his mind, why distract us with anything else?

The Library of American Comics goes to extraordinary lengths to find the best art possible for their compilations. This is one of the finest volumes in their history. Every line of art is crisp, clean, just so easy to read and enjoy. Choosing to print three strips per page allows the reader to easily spot details in Taliaferro’s work that may have evaded readers 70+ years ago when these strips first appeared.

There is nothing dated about these strips. Today, Donald is still relevant to almost everyone on the planet. The site Buzzfeed just ran a comparison-test to see if you were a Donald Duck or a Donald Trump. In Sweden his cartoons are a Christmas tradition (Kalle Anke). Show any child on the planet one of these strips and they will smile.

No newspaper comic strip has ever captured the frenetic energy of a vaudeville or Chinese acrobatic act coupled with the wild physicality of the silent film era as these Donald Duck strips do. Taliaferro’s ability to render absolutely hysterical even the slightest gag is a gift.

One Donald Duck daily by Al Taliaferro will make you understand that deep down inside, we are all human. Beautifully, wonderfully, insanely human.

It takes a Duck to remind us of that.

Be human, read a duck.