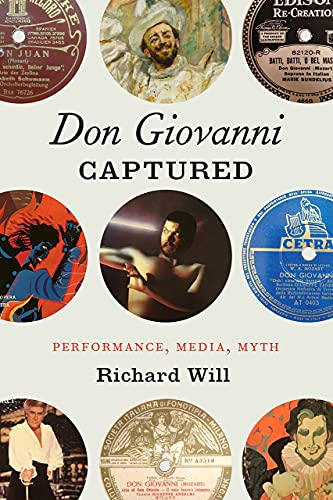 “For those of us who care about opera, Don Giovanni Captured is a fascinating book.”

Mozart’s and DaPonte’s opera, Don Giovanni poses unique problems for contemporary producers and audiences. In our #MeToo age, it is impossible to see its hero as the fun-loving libertine past audiences enjoyed. The first act begins with his attempted rape of a young noblewoman and ends with his attempted rape of a peasant girl. His servant boasts to another victim that the Don has seduced (or forced), a thousand and three women. Some 19th century writers saw Don Giovanni as an embodiment of the life force racing against time for self-fulfillment. Nowadays, he is at best a sex-addict, at worst a predator—an example of toxic masculinity. This contemporary reading has taken much of the comedy out of this “dramma giocoso.”

Musicologist Richard Will’s fascinating study, Don Giovanni Captured, examines the way Mozart and Da Ponte’s opera has been heard and seen since the birth of recorded sound. His interest is not in the opera on stage, but rather the opera heard through recordings and seen through video recording and live streaming. The media are the way most people experience the opera and a close look at the sound and video recordings illuminates our understanding of the many changes in interpretation and performance practice that have occurred since the late nineteenth-century.

Will begins with the age of 78 rpm recordings of excerpts from the opera. Since one side of these old shellac recordings could only hold about three minutes of music, shorter arias were featured rather than longer duets or ensembles. Don Giovanni’s character was mostly known through his more seductive moments like the serenade from the first scene of Act II. Taken out of context, the serenade sounds like a romantic invitation. In the opera, it’s part of a cruel deception.

The same could be said of the Don’s duet with the peasant girl Zerlina, “La Ci Darem La Mano,” perhaps the most famous moment in the opera. Listening to the old recordings of the Don’s aria demonstrates a change in vocal style between singers born in the mid-19th century who were trained to ornament the vocal line and later singers who adhere to the notes in the score. The former more accurately reflects practices from Mozart’s time to the 20th century.

A discussion of recordings of the Don’s and Don Ottavio’s arias leads to a discussion of the changes in ideas of masculinity that are reflected in interpretations of their arias. The work’s only tenor, Don Ottavio, the fiancé of Donna Anna, the Don’s first victim in the opera, can be seen as less virile, less decisive than the impetuous Giovanni. For all Ottavio’s vows of vengeance, it is not he but a supernatural force than brings down Giovanni. One also sees the contrast between the Dons in photographs of the performers in costume—the Don sexy in tights, Ottavio more primly dressed.

The 78 rpm discs had no translation or plot synopsis, so RCA Victor published The Victor Book of Opera with stories of the operas and illustrations. Works like these reflected prevailing interpretations of the opera as “all fun and romance,” suitable for home listening. Likewise, the available translations of the peasant girl Zerlina’s popular and easily excerptable arias diluted the sexual knowingness of her lyrics.

The long-playing era led to many complete recordings of the opera, first on 12-inch discs and later digitally produced on compact discs. These complete traversals of the score reflect different performance styles from the romantic grandeur of conductors like Wilhelm Furtwangler to fleet historically informed performances on the sort of instruments Mozart knew. With the help of accompanying background essays and complete translations, listeners could imagine their own productions. They could also choose between varying approaches to the leading character from the suavity of a Cesare Siepi to the brashness of Eberhard Waechter in the classic recording conducted by Carlo Maria Giulini.

In this section, Will focuses on two moments in the opera: the cruel treatment of Donna Elvira at the beginning of the second act and the elaborate Act I finale which, among other features, includes three instrumental ensembles playing three different dances simultaneously. Since excerpt recordings tended to feature short arias by Don Giovanni, Don Ottavio, and Zerlina, Elvira did not loom large in the listener’s experience until complete recordings were available. There one can hear what Will calls, “the constant savaging of Elvira,” the woman the Don seduced and abandoned, but who still loves him. Interpretations of the jokes the Don and his servant Leporello play on Elvira have changed from emphasis on the gullibility of the woman to the sadism of the men.

Seeing performances of the opera via video recording or streaming give us the work mediated by stage directors whose interpretations range from traditional to radical, and video directors who decide what will be offered on screen at any given moment. Here we have a tension between believing in the character and watching the performer go through the physical effort of singing, emphasized by close-up camera work.

In this section, Will focuses on the other wronged woman, the aristocratic Donna Anna, whom Don Giovanni attempted to rape in the first scene. In trying to escape, the Don kills Anna’s father. Is Anna merely a woman looking for vengeance as she claims, or is she attracted to her attacker, pursuing him out of a sexual obsession? Different directors and performers have moved from the former to the latter approach. Will rightly claims that a sexually repressed Donna Anna is no more psychologically plausible than one traumatized by her sexual assault.

An appendix lists offers a complete discography and videography.

One’s interest in Will’s book depends on one’s interest in Mozart and Da Ponte’s opera, musically rich and dramatically fascinating but almost impossible to produce effectively. Will has heard every available recording and has watched all the visual representations of this great and elusive work. He wisely does not go into detail on every recording, nor does he attempt in a monograph to discuss every interpretation. Instead, each section focuses on specific moments and characters. What he does show successfully is that the recorded history of Don Giovanni, does not only show changes in performance practice over the years, it also shows the changes in Western mores, particularly in terms of gender relations. For those of us who care about opera, Don Giovanni Captured is a fascinating book.