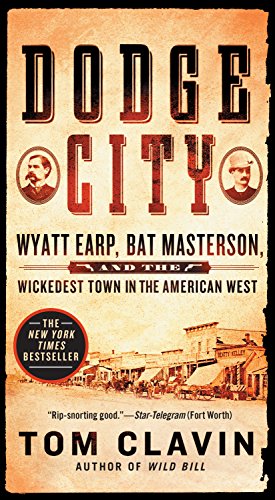 "Clavin weaves a tale of brothels, buffalo, cattle, Colt revolvers, desert, faro, gunfighters, Indians, railroads, saloons, and wagons but mainly of the friendship between the legends of Wyatt Earp and Bat Masterson."

Tom Clavin found research in his topic daunting. "Almost all of the books are largely fiction, including the ones published as non-fiction." To learn the truth of Wyatt Earp and Bertholomiew "Bat" Masterson, amid "exaggerations, embellishments, rumors, and outright falsehoods," the author sought "to find the most reliable sources."

The result, Clavin's Dodge City, tells of the intersection of Earp's and Masterson's "stories intersected in Dodge City in the 1870s." Wyatt Earp had already gained national renowned before Stuart Lake's monumental semi-fictional biography that began making the legend "more important than the real life of the man." Masterson's life, "based more on legend than fact," has fewer works.

Dodge City, Kansas in legend lies in the shadow of Tombstone, Arizona, as Masterson does Earp. Clavin argues, however, "no other city west of the Mississippi was more of free-for-all of cowboys, gunfighters, gamblers, prostitutes, entrepreneurs, prospectors, and others" than this cow town as it went "from watering hole to a center of Kansas commerce."

Earp and Masterson fought beside each other in Dodge City long before they had left for Tombstone, and the Gunfight at the O. K. Corral became history. In 1883, they returned to fight the Dodge City War knowing that possibly there "their luck would finally run out."

When Masterson "is there [at all] he's usually portrayed as being little more than a comic foil or coat holder" to Earp. He actually fought Indians and survived the Adobe Wells fight. The two friends shared much in common: each had little education, came from poor hard scrabble large families on the frontier, and had hunted buffalo.

The two men became legendary killers and lawmen in their own time. "If any two men could lead a town-taming effort, those men were Wyatt Earp and Bat Masterson" but "having a psychopath for a marshal would mean more and more killing." Problems included cowboys, debts, large ranchers, robbers, rustlers, and storeowners.

"Taming such lawlessness in Dodge City would create a blueprint for establishing a system of law and order everywhere in the West." "Dodge City needed an enforcer who was not to cross the line into lawlessness" as "many of the citizens of Dodge City were trying to construct a civilization."

The Earp brothers and the Masterson brothers were, in a way, a gang who were tougher and more righteous than the other gangs." These "gangs" associated with like spirits such as James Butler Hickok, John Henry "Doc" Holiday, and Kit Carson. Earp and Masterson lived long lives, not so for many people around them.

Clavin "attempted to follow the example of the Western Writers of America" in "combining strong scholarship with entertaining writing." He succeeds, although his writing will not impress grammarians. Dodge City has a bibliography but no footnotes. It is well illustrated.

The author dedicated himself to "using solid research and reasonable versions of events." Clavin weaves a tale of brothels, buffalo, cattle, Colt revolvers, desert, faro, gunfighters, Indians, railroads, saloons, and wagons but mainly of the friendship between the legends of Wyatt Earp and Bat Masterson.