Doctor of Horror and Other Stories 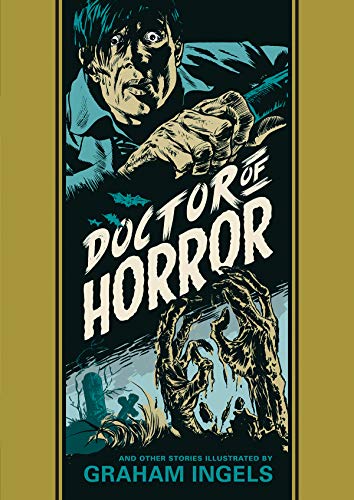 The fall season is a time of death. Samhain, Dia de los Muertos, Halloween, All Saints Day. Death is in the air when the weather turns cold, and so it is appropriate to consume speculative fiction between the months of October and December. Doctor of Horror and Other Stories is a perfect compendium of comic chills, all of which were illustrated in the late 1940s and early 1950s by EC Comics’ Graham Ingels. Nicknamed “Ghastly,” Ingels’s artwork relied on heavy black lines and a type of populist Expressionism that was rabidly consumed by adolescents, teens, and adults in the days before the US government cracked down on horror comics.

Oddly enough, Doctor of Horror and Other Stories actually opens with a series of cowboy and crime stories about train heists, wannabe gunslingers, and tough-as-nails crooks. These stories served as Ingels’s first foot in the door at EC. From there, beginning with “Curse of the Pharaoh,” Ingels found his niche as a horror and suspense artist. It was Ingels’s character The Old Witch and the series title Haunt of Fear that truly propelled EC into the mainstream as the premiere horror comics publisher.

Doctor of Horror and Other Stories lovingly presents some of “Ghastly” Graham’s best illustrated stories. Among these, standout stories include the titular story (a retelling of the Burke and Hare crimes of the 1820s), “Rats Have Sharp Teeth” (a loose adaptation of Henry Kuttner’s short story “The Graveyard Rats”), “A Moment of Madness,” and “The Hunchback.”

Most of these stories follow a recognizable formula that came to embody the EC brand of horror: a pair of illicit lovers conspire to kill off a rich old husband, only to have that husband come back to life as a vengeful zombie. Other themes include the gruesome twist ending (another EC staple), vampires, the exhumation of corpses, and graveyard settings. The stories in this collection are repetitive, but Ingels’ amazing penciling manages to pull some of the more insipid stories towards greatness.

Doctor of Horror and Other Stories is a great way to acquaint new audiences with the heyday of American horror comics. Arguably, Ingels was the best of the bunch, and his moody work helped to define the morbid style of EC Comics. All one has to do is study the anguished face of the conspirator Jim Kelleber in “The Hungry Grave” in order to see why “Ghastly” Graham Ingels is so worshipped by EC fanboys and girls alike.

This graphic novel is a fun, quick read and an awesome celebration of Ingels’ work. The horror here is further heightened by the biographies of Ingels that talk about his struggle with alcoholism, his abandonment of his wife and children, and his decades-long attempt to hide in obscurity. Without question, Doctor of Horror and Other Stories shows how this brilliant artist’s personal demons informed his fiendish work.