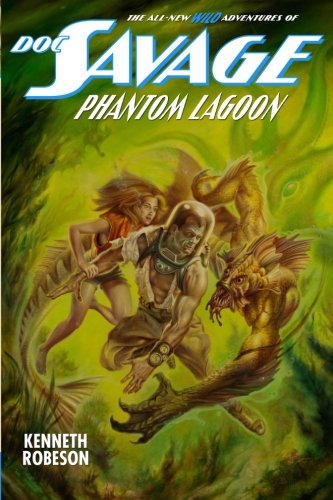 “Doc Savage: Phantom Lagoon is the perfect mixture of adventure and escapist fantasy matched against unbelievable action while surprising twists keep us turning every page to find out what will happen next.”

Will Murray’s latest chapter in the ongoing story of The Man of Bronze Doc Savage: Phantom Lagoon is a perfect example of why the hero has been in print since his first appearance in 1933. Doc Savage: Phantom Lagoon is the perfect mixture of adventure and escapist fantasy matched against unbelievable action while surprising twists keep us turning every page to find out what will happen next.

Most importantly, it is the way that familiar characters interact and yet still manage to surprise us. From the stoic and heroic nature of Doc to the stalwart members of his crew, we think we know them, and yet somehow we are constantly amazed at how they respond as crisis after crisis piles up rapidly.

At the center of this adventure is a mysterious woman, Hornetta Hale, who demands that Doc Savage rent her his famous submarine without revealing why. Knowledge of Doc as a leader in technological innovation and scientific breakthroughs is a common fact of the day. She is under the impression that The Man of Bronze can be bought for money.

As it happens, Clark Savage Jr. does not deal well with demands, but he will listen to any reasonable request—especially one made by such an insistent and clearly driven woman as Ms. Hale.

His patience with the woman nearly costs him as his famous headquarters on the 86th floor of one of Manhattan’s most famous skyscrapers suddenly comes under attack. While his private world and scientific headquarters are dealt blow after, he and his team defend themselves as best as they can.

It seems that someone is willing to go to great lengths to keep Ms. Hale from making any contact with Doc and his team, as these unidentified villains seem to be unlimited in their number and willing to sacrifice their lives to keep Doc and Ms. Hale from even talking.

Barely two chapters into the book and Mr. Murray is already threatening one of the most important parts of the Doc Savage mythos with complete and utter destruction!

From there the chase starts and seldom lets up for the next 200 pages. Ms. Hale makes her escape amidst the confusion and does her best to lead Doc, Ham, Long Tom, Monk, and Doc’s female cousin Pat on one of the wildest chases in the long history of Doc Savage.

The small army that attacked Doc’s headquarters is never far behind as a constant impediment to Doc ever finding out what is at the center of Ms. Hale’s urgency.

The action takes place on a grand scale as it moves from planes to ocean liners to schooners, over to seaplanes and high powered automobiles. It moves from New York City to across the ocean and back into the Western Hemisphere as everyone makes their way to the islands of the Caribbean.

Even Doc appears to be unsure as to why Ms. Hale is being chased or what those who are chasing her are looking for. As we follow the destruction and complications, the reasons for the chase slowly reveal themselves and the answer will surprise everyone.

The novel takes place in a late November of an unspecified year but you can easily feel that a war may be very close to happening. While women may have often had a secondary role in the heyday of pulp stories, Mr. Murray features some of the toughest and most able heroines of their time.

Neither Hornetta Hale or Doc’s cousin Pat are shy about using firearms nor are they hesitant to mix it up with anyone who gets in their path. They stay in perfect step with the men, matching them blow for blow, often outwitting them as they do.

Doc Savage: Phantom Lagoon is the perfect place for a new reader to jump in and discover what has kept Doc so popular over the years. It is also great a reminder of how pulps influenced comic books. From the hero to his team to the women who drive the action, there is something for anyone who picks up the newest chapter in Doc Savages history.

No hero had ever burst out of the world of pulps like Doc Savage did when he first debuted in 1933. His origins were a deliberate attempt by the publisher of Street and Smith Magazines to duplicate the pulp success they had with The Shadow.

While that character took form first on radio and moved into pulps with a perspective that could change, the growth of Doc Savage took place under the eye of one man, Lester Dent writing under the publisher’s brand name Kenneth Robeson.

It was Dent who fleshed out the barest of outlines given to him by the publishers to make Doc Savage a full-fledged American icon. What he built was a wondrous universe filled with a mythology and characters so complete that it filled two schoolboys in Cleveland, Ohio with a vision.

Within six years of Doc’s debut Jerry Siegel and Joe Schuster had created their own version of Mr. Dent’s hero. They called him Superman.

There is a quiet irony in the idea that The Man of Steel and the quick rise of comic books in American culture led to the slow decline of The Man of Bronze and pulps in general over the next decade. No matter how the readership of pulps declined, the greatest hero of them all, Doc Savage has been in print since his first appearance. An amazing feat for any character found in adventure literature.

Any self-respecting fan of comics needs to read at least one pulp in a lifetime. It doesn’t matter if that fan is a strict worshiper of Spider-Man, fascinated by Green Lantern’s space adventures, a young woman who has just discovered Manga, or the traditional cliché of a guy living in his parent’s basement with Cheetos-stained fingertips, Doc Savage: Phantom Lagoon is the book to start the journey—just a peek into a brand new world of adventure.