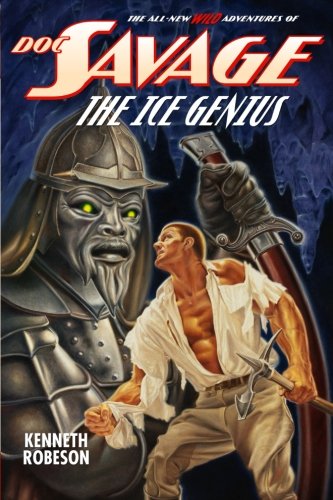 “the work of a professional at the top of his game.”

The years that led up to World War II were a nervous and unsure time in world politics. It was an era where, as war was most surely approaching, no aspect of life was left unaffected. Politics, work, money, travel, farming, science—every single aspect of human existence seemed to be lurching uncontrollably into conflict.

No matter what was happening on the world’s stage, in the world of pulps and adventure fiction, Doc Savage understood. When one of his team finds a large frozen figure in Mongolia, he and the other four have to gear up for an unscheduled trip to this unknown and dangerous region. Aware of the political difficulties imposed on navigating the world, they elect to fly up to the Arctic Circle and move across Russia on their way to Asia!

When Doc Savage first hit in 1933 the world was a vast unknown. The original stories saw Doc move from the Arctic to the Caribbean and over to the Amazon on a monthly basis. Will Murray continues this tradition of stories that cover the world in his newest volume, Doc Savage: The Ice Genius.

Working from ideas laid out by the most famous of Doc Savage scribes, Lester Dent, Murray has constructed one of the most entertaining and exciting novels of his long career. Expanding on what the author has left behind. Murray stays true to the style, pace and discipline of Dent’s own work.

This is a sense of adventure rooted in another time and another place. The action is born of an understanding of an America that is a growing bolder as it strides onto the world stage. Many of the classic Doc Savage stories that Lester Dent (writing as Kenneth Robeson) wrote were driven more a moral authority, a sense of “doing the right thing” that was at the center of the action.

Murray builds that feeling of a time gone by keeping the characters in their original world. Savage fought in World War I and his team is comprised of those who fought alongside of him. Each one of them still bears a military title as part of their name. Among those on his team are Lt. Colonel Andrew Blodgett "Monk" Mayfair, Major Thomas J. "Long Tom" Roberts, and Colonel John Renwick. Their link is of a noble military heritage.

Each one of them has a specialty. William Harper "Johnny" Littlejohn, is a historian, an archeologist and a professor. He is on a dig in Mongolia when he discovers a frozen warrior named “Tamerlane.” Unfortunately when the man is awoken he is still looking to conquer the world. It doesn’t take long for him to find a lot of people who are more than willing to help.

Murray places the story in the days leading up to Pearl Harbor. Keeping the story anchored in the timeline of actual history adds an interesting dimension to the classic nature of the pulp action. Trains crash, planes battle, Mongol hordes attack, and narrow escapes are all part of the course as the march toward the inevitable conflict moves forward.

Halfway in the story, when the events of December 7, 1941, actually take place, we see a frantic Doc Savage looking for guidance from Washington. Unable to get through due to jammed radio frequencies (even his secret wavelength is closed off) Murray shows us the frustration and pent up fury of Doc’s forces.

Murray doesn’t limit his work to modern history. He crosses centuries. Some may recognize the villain Tamerlane as the subject of the Edgar Allen Poe poem of the same name. Poe took the name from a very real 14th Century Mongol Warlord who looked to restore the dynasties established by Genghis Khan. He was also known as Timur.

The Japanese are unable to fight Tamerlane properly. When they think that they have made him, as Murray writes, “. . . an arm of the Imperial Army,” they quickly discover that he firmly believes that he is the one fated to rule over the entire world.

This is a Doc Savage story written on a massive scale that rips quickly across a massive stage. Like the best of modern comic books, Murray dips back into the character’s long heritage to add to the experience. One of them is the villain Cadwiller Olden, also known as Monzingo Baldwin. His part in the story will surprise both new readers and catch those who think that they know Doc Savage inside out off guard. Doc equally bronze young cousin Patricia even shows up!

As a character Savage has played a big part in the evolution of modern entertainment. He was, along with The Shadow, one of the two most important pulp character ever created. There are elements of his influence in Superman (Fortress of Solitude), Batman (his utility belt) and The Fantastic Four (on office and lab high in a skyscraper). Over eighty years later his adventures continue in grand fashion. He even tinkers with criminals minds just like some in The Justice League did in the memorable 2004 series Identity Crisis.

Today the pulp mentality of action, adventure and the unknown lives on in television and movies. Look at Elementary and all the CSI series. They are straight from the classic mentality of pulp adventure and detective work adapted to 21st century values. The anthology series American Horror Show is just a serialized edition of Weird Tales, Horror Stories or Thrilling Wonder Stories. Pulps are where Star Wars came from . . . comic books as well.

Doc Savage: The Ice Genius is a trip back into the world of pulp and adventure that proves the genre still has miles to go until it is exhausted. This is the work of a professional at the top of his game.