Do No Harm: A Dr. Katie LeClair Mystery 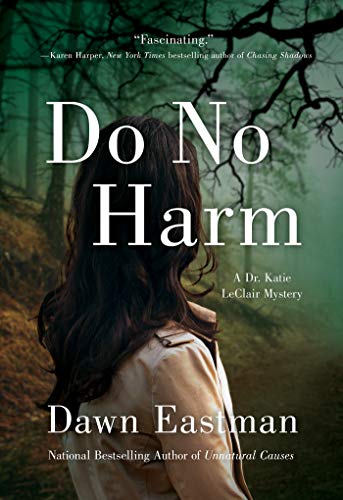 “Do No Harm’s biggest strength is the way Dr. Katie LeClair fully engages in realistic dialogue and delightful interaction with those closest to her . . .”

This mild mystery has all the elements and reader expectations of a solid amateur sleuth story. A popular, upstanding character in a small town setting with an enviable love interest, and a flighty best friend. Quirky minor characters, in this case, two grumpy, busybody old ladies who are rude to the neighbors. A computer geek brother serves as the required source of difficult to find information. A lovable, well-meaning police chief who misses an important clue. It's all there.

Michigan locales are increasingly popular in mystery fiction these days, yet there is nothing of Michigan in this book other than a mention of Ann Arbor and the university. In fact, nothing in the book highlights a picture or perception of what is special about Northern Michigan. Not a single mention of the Great Lakes, the state's most well-known and notable geographic feature. There is a real place called Baxter, Michigan, but no mention in the book of its nearest city of note, the popular resort area of Traverse City.

But what's really missing is the warm, comfortable small town feeling of a quaint Main Street with a description of local businesses, a library, a bookshop, a bakery, and the aroma of fresh coffee wafting from a local coffeeshop hangout. The story could have taken place anywhere.

The story is a familiar well-used, but nonetheless popular mystery trope. Ex-con returns home after spending time in jail for a murder he didn't commit. Then, when a similar crime is committed, there is gossip and scandal, and he is, of course, accused again.

The ex-con in this story is mild mannered Eugene Lowe. In his youth, he unrelentingly stalked a fellow student, Alicia Stewart, and later was found at the scene of a crime. He was arrested, convicted, and sent to prison. The book begins after his release and his return home where he is bullied, threatened, and beaten.

Small wonder, though, since he exhibits such suspicious behavior. Silent, secretive, evasive, a loner prone to questionable extended absences, he continues to stalk Alicia even though she is now married and the mother of a small baby.

Dr. Katie LeClair gets involved after she treats Eugene for injuries sustained in what he says are falls and other mishaps, but which she clearly diagnoses as assaults. She comes to believe he was unjustly imprisoned. With the help of Chief Carlson, who investigated the original murder, and Caleb, her information highway computer geek brother, she revisits the old case and re-interviews the witnesses. Her efforts reveal a web of lies and misdirection that had swung the old investigation off course. Hence, the wrongful conviction.

But Eugene does a lot to make himself look guilty. Consider his implausible story to the police at the time of the first murder:

". . . 'I thought it would be funny. I figured if I stole all of her underwear, she'd have to notice pretty quick . . . But when the police found all that stuff it wasn't so funny.'"

So is it much of a stretch that he's a suspect when a college student researching that old murder disappears and is later found murdered?

No bombshells, no surprises. Miscellaneous characters are mentioned, some who never actually appear on the page. Trivial details could better have been replaced with more character development. Also, readers might find it improbable that police would not confiscate as evidence a stash of computer memory sticks that look like plastic animals found in the victim's desk drawer, and hold key clues.

The book's biggest strength is the way Dr. Katie LeClair fully engages in realistic dialogue and delightful interaction with those closest to her—her love interest Matt, her brother Caleb, and her best friend Gabrielle.

Do No Harm is the second book in the Dr. Katie LeClair Mystery series. Author Eastman has received wide acclaim for her first book in this series, as well as the four books in her Family Fortune Mysteries, but sorry to say this book misses the mark.