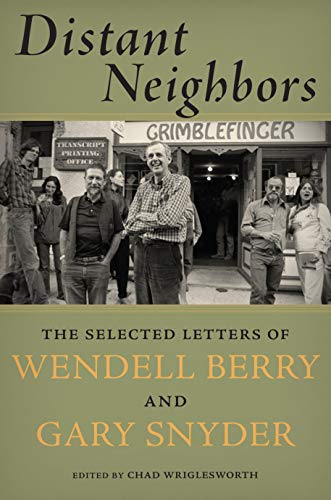 “It’s a shared journey that is carefully documented by editor Chad Wriglesworth in notes and index. We are privileged indeed to share this wise and noble correspondence by two of our finest persons and writers on things that matter.”

It is a real treasure to have this correspondence begun in 1973 between these two contemporary giants of American literature and thought. Their writings take us through five decades of sharing ideas, poems, relationships, and critiques of the world and each other’s works. Begun with a few letters of shared admiration, the correspondence quickly launches into the things that matter to them: large issues of culture, environment, religion, and those close to home such as writing, farming, and family.

There are frequent visits by Snyder to Berry’s farm at Lanes Landing Farm in Port Royal, KY, and Berry to Snyder’s Kitkitdizze communal home in Nevada City, CA. At times they write candidly of struggling with work and travel, lecture obligations, and shared deadlines at their friend Jack Shoemaker’s Counterpoint Press. One longish yet informed exchange includes a detailed critique and response on Berry’s ecological essay “Preserving Wilderness.”

The heart of the book is the close exchange of two concerned and wise observers working to understand their life and the world, the same thing they do in their verse and essays shared with the public. Only here their guards are down, and they talk directly admitting their confusions and struggles to understand their culture and even each other. There is no restrictive agreement between them. Snyder relates fundamentals to his Buddhist approach, and Berry to his private Christian vision, and yet they listen to each other intimately and work to share and understand.

Here is a sample of the kind of correspondence they share:

“Thanks for the comment on mind-reality and the Yun-men text. That’s useful. We’ll have to talk more on this. There’s a chickadee eating suet outside the window now. I call him ‘real,’ if by nothing else, by courtesy. But I think it is more than courtesy. I could be wrong about his reality (and importance). And I could be wrong about him in such a way that he could no longer live here. If I refuse to let him in my mind on the assumption that he is “out there” on his own standing, then I may get him out of my mind by getting him out of the world. But I want to extend myself the courtesy of being out of my own mind. Bad to be stuck inside your mind, worse to be stuck in somebody’s else’s—both are possible.”

“Frogs in the pond, sand-hill cranes flying north over. Didn’t hear the cranes till the frogs stopped suddenly. Similar sounds. Those cries. (No difference between reality ‘in the mind’ and ‘out there’—a seamless continuum—especially if one can accept the fact that his own ‘consciousness’ is not personal, private, special, or unique but just another sort of air and water).”

Both men go on to write of their daily work and doings, yet their continual awakening to and recording of the world and their minds and hearts moves these letters. It’s a shared journey that is carefully documented by editor Chad Wriglesworth in notes and index. We are privileged indeed to share this wise and noble correspondence by two of our finest persons and writers on things that matter.