Disco's Out...Murder's In!: The True Story of Frank the Shank and L.A.'s Deadliest Punk Rock Gang 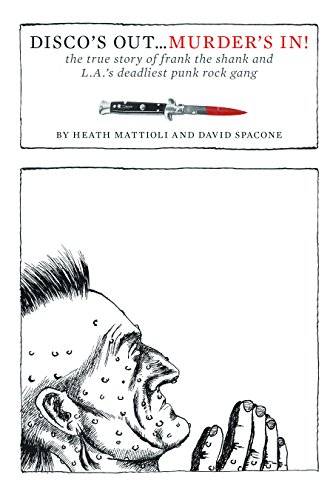 In the final minutes of Martin Scorsese's Goodfellas, Henry Hill (Ray Liotta) opens the door to his nondescript suburban home. Dressed in his bathrobe, his bends over to pick up the morning newspaper. His voice-over laments how this former gangster, now in witness protection, has to eat egg noodles with ketchup and live the rest of his life like a schnook.

Before the scene can be fully digested, an image of Tommy DeVito (Joe Pesci) points a pistol at the screen and shoots off several rounds. The background music swells, cut to black, and the end credits roll. Over the credits, Sid Vicious offers a snarling cover of Frank Sinatra's “My Way.”

Disco's Out . . . Murder's In: The True Story of Frank the Shank and L.A.’s Deadliest Punk Rock Gang by Heath Mattioli and David Spacone offers the same lurid glance into a violent world. Instead of doo-wop and the Rolling Stones, the story of Frank the Shank has a soundtrack of punk rock and hardcore. The energy, aggression, and camaraderie of the Los Angeles punk rock scene also had a fair share of violence, murder, and drug abuse.

Mr. Mattioli and Mr. Spacone provided a means to give Frank the Shank's life a narrative shape. After meeting him during a funeral at Forest Home Long Beach, the pair felt nostalgic and reminiscing turned into a desire to chronicle Frank's life.

In the prologue, the authors state “Some names were changed to protect the guilty.” The bulk of Disco's Out follows Frank's rough childhood, getting beaten up by hippies and his father, and his entry into the world of punk rock gangs.

Like other narratives of this kind, Frank's life follows the same milestones. He finds solidarity and meaning in gang life. He discovers a new musical world and he enjoys the violence he dishes out while he climbs the ranks of the gang's organization. He eventually becomes underboss of the LMP, named after the La Mirada Regional Park.

Despite the violence and aggression, Frank makes clear LMP is not a racist organization. LMP is a fascinating confluence of Italian-American kids, Mexican cholo gangsters, and punk rock fans. He also voices regret, not simply for all his violent acts, but the gang's acts of violent gay bashing. Disco's Out is a story of Frank's growing maturity and eventual disillusionment with gang life.

Once again, Feral House proves it is the agent provocateur of the publishing world. Disco's Out is not only a sensational peek into Los Angeles gang violence, but equally informative about the local punk rock music scene. Bands both famous and obscure get mentioned, with Frank's candid opinions on punk rock, posers, and rival gangs.

It joins the ranks of other punk rock memoirs like Lydia Lunch's Paradoxia and the San Francisco punk rock 'zine Search & Destroy. Violence wasn't simply the result of punk rock, it was the very heart of the genre. Frank the Shank takes us into this heart of darkness with a mix of candor and humor.