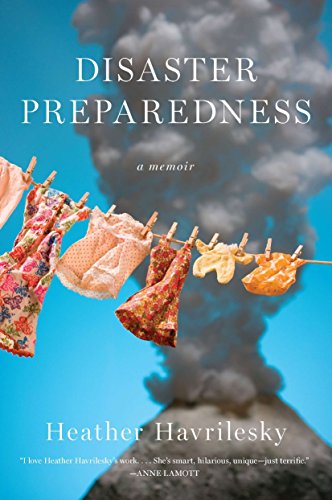 Memoir is a medium that is back in vogue again. Not surprising really, given that reality television, blogs, Mom TV, and podcasts are growing faster than any other media in history. Heather Havrilesky, author of the very humorous Rabbit blog and a staff writer up until recently at Salon.com, is one of the latest in a line of authors to tackle the genre. Havrilesky’s blog is witty, biting, entertaining, and clever. Her online writing is also fearless. Over the years spent at Salon.com, she tackled pop culture, literature, television, and public figures. She has skewered, teased, and completely dissected a variety of topics and personalities. She is often controversial and always enviously funny.

Havrilesky’s book is an exercise in metaphor, the title a commentary on a period of time in which children were raised to believe the sky was falling every day. Difficult not to grow up twitchy when some adult, parent, or teacher is always yelling from behind you: “Duck!” or “Look out!” She vividly recalls being in junior high and having lessons that centered almost entirely on the Iran Hostage Crisis.

Disclaimer: The author and I are in fact almost the same age and were raised in a similar style. There are so many cultural references here that resonated with me that at times it seemed as if I was reading a sarcastic narrative of my early years. Raised by parents that feared almost everything, a child of the seventies, and the product of a bitter divorce—well, we might have been sisters. Save for the fact that she is American and I grew up in Canada, I literally could have been the student sitting beside her in junior high listening to all the educators conducting lessons in fear and tormenting children with the idea that World War III was imminent. The familiarity of this book is both appealing and slightly grating at times.

Disaster Preparedness, while a memoir, is not overly self indulgent as so much of this genre can be, nor is it horribly shocking, sad, or horrifying. It lies somewhere in the middle on a scale of self indulgent and cathartic. That is both the strength and the weakness of this story. It is not the tale of a suicidal, alcoholic, sexually abused young woman which might have readers transfixed by the story of triumph over adversity. Nobody gets cancer or dies in a plane wreck.

Nor is it the story of a renowned celebrity recounting a life’s work or accomplishments and travels. Instead, it’s a smart snapshot in time—a memoir for late Generation X readers, with a slightly feminist bent. Nothing much happens really, which is kind of the point. After a childhood spent preparing for pending doom, the bomb, World Wars, earthquakes, typhoons, and giant killer sharks, nothing much happens, that is, except for life itself and the things that occur between the lines.

Havrilesky’s talent is sarcasm and attention to detail. On religion, for instance, she muses: “It’s odd, really, that so many people believe that religion will give their kids peace of mind and sense of structure considering how much darkness and chaos and horror is wrapped up into it.”

She recreates the crazed 70s in such fine strokes that you can easily travel down the path of her parents’ crumbling marriage: “Around the time my parents stopped making the slightest effort to hide their distaste for each other, we started taking long family vacations in the car each summer. This is the perverse logic of two people caught in a crumbling marriage: Instead of spending as little time together as possible, they vow to spend more time together, thinking they might reignite some lost spark through the purgatory of enforced contact.” Havrilesky’s road trips are spent crammed into a failing Impala, reading a Rand McNally atlas, the children navigating as parents argue. The references themselves are bitterly funny.

Perhaps the most difficult task of a humor writer, more challenging than dialogue or description, is the rendering of sarcasm on the page. Online writing can be the perfect vehicle for this tool. In book form, sarcasm can be grating or heavy handed. It can even be lost entirely on the reader. For the most part Havrilesky’s sarcasm works here, but this is not a memoir that will appeal to everyone. Readers who follow her online will enjoy this glimpse into her formative years. Readers over 50 will, I would think, find this tedious.

Disaster Preparedness is not Angela’s Ashes’ style of maudlin bestseller. It is not an Oprah Winfrey pick, and probably never will be. It is a book for those of a certain age who get a chuckle out of quick witty exchanges, those who enjoy references to “Charlie’s Angels”—the first and original version, not the stylized remakes with Drew Barrymore.

At times the book is laugh-out-loud, side-splittingly funny. The author herself is so witty and right and accurate in her assessment of an age and a moment in time that it gives the appreciative reader pause. Her take on cheerleading tryouts as a masochistic right of passage for all girls is just one example. Havrilesky’s memoir is filled with a certain gallows humor, i.e. not for those who are sensitive. There were times when I couldn’t wait for this book to be done, but the metaphor was so smart and well done that it stuck with me. The ending is messy perfection: insightful and empowering and, in itself, worthy of the moments of tediousness on the journey that brought you there.