The Disappearing Spoon: And Other True Tales of Madness, Love, and the History of the World from the Periodic Table of the Elements 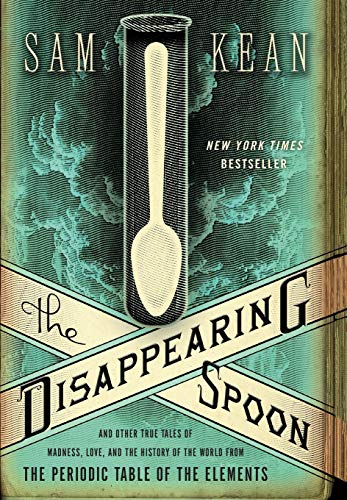 If you slept through high-school chemistry, this is your chance to learn about the Periodic Table in a truly painless and highly entertaining way. In fact, Kean’s book probably should be part of the curriculum if only for bringing life to that weirdly shaped grid of cryptic abbreviations and numbers.

Kean, a D.C.-based science writer, knows how to explain scientific topics with clarity and wit. Even better, he’s got a wealth of fascinating stories about the people behind each element.

He begins by relating his childhood fascination with mercury, breaking old-fashioned thermometers to “marvel” at the mercury inside, and its unfailingly cohesive behavior and quicksilver appearance. Mercury’s liveliness earned it the name of the Greek gods’ fleet-footed messenger. Medieval alchemists tried to turn it into gold. Later people tried to use it for everything, including medicines like Dr. Rush’s Bilious Pills, a 19th century cure-all so popular that Lewis and Clark carried a case of it along on their trek to the west coast. In fact, archaeologists can easily locate their historic campsites by hunting for the mercury left in the soil from their latrine pits.

No surprise that, as Kean relates, “From that one element, I learned history, etymology, alchemy, mythology, literature, poison forensics, and psychology.”

And that’s just the beginning. “There’s a funny, odd, or chilling tale attached to every element on the periodic table,” Kean tells us, and then goes right on to prove it with enthusiastic glee.

Consider ancient king Nebuchadnezzar, who ordered his palace walls painted yellow—a color achieved with highly poisonous antimony and lead—and then went mad, “probably not coincidentally.” Or Robert Bunsen, inventor of the spectroscope used to identify elements by the spectrum they give off when burned, but far better known for inventing the Bunsen burner: “the device that made him a hero to everyone who ever melted a ruler or started a pencil on fire.” Or physicists Glenn Seaborg and Al Ghiorso, who discovered more elements than anyone else, ever: “the stoutest hunters with the biggest elephant guns, the Ernest Hemingway and Theodore Roosevelt of the periodic table.”

Less cheerful are some of the insights into the roles of women in cutting-edge science—think Marie Curie, discoverer of radioactivity and several elements herself; Lise Meitner, who worked out the physics of nuclear fission only to have the credit stolen by her mentor Otto Han; and chemist Maria Goeppert, who figured out the principles that govern atomic structure. All worked at a time—not long enough ago!—when a woman, no matter how brilliant, could only get lab space by marrying a male scientist. Then there are the troubled mad scientist types like intrepid David Hahn, a 16-year-old Boy Scout who managed to build his own working nuclear reactor in a backyard shed.

The elements themselves are characters here as well, each with a distinctive personality: The noble gases, “incorruptible and ideal” in their standoffishness, refusing to interact with other elements; “Promiscuous” carbon, a friendly element that’s more than happy to chemically bond with darned near anything else; silicon, whose unfriendly chemical properties make science-fictional “silicon-based lifeforms” unlikely; or changeling elements like polonium, “the Loch Ness Monster of the elemental world,” which has been discovered for the “first time” by more scientists than any other element.

The Disappearing Spoon is a celebration of periodic table facts and trivia about the search for knowledge, wealth, and power, exploring far-flung topics, from chemical weapons to superconductors, patent medicines to nuclear power. “Between hydrogen at the top [of the periodic table] . . . and the man-made impossibilities lurking along the bottom, you can find bubbles, bombs, money, alchemy, petty politics, history, poison, crime, and love. Even some science.”