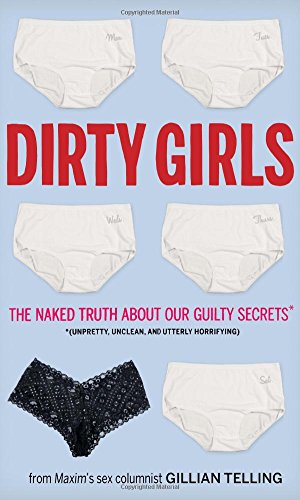 If you are a reader of Maxim, then Gillian Telling’s name may be familiar since she is their sex columnist. Her career, writing primarily for more male oriented magazines throughout the years, seems at odds with this book once you start it. Telling is blatant here, declaring her intended audience is women and that men shouldn’t be reading this book at all. However, most of her ten chapters include sections labeled for men to read, specifically the men in her readers’ lives.

This somewhat odd appeal to both women and men reflects Telling’s basic revelation: Women are human beings. That might sound silly and obvious, and yet as Telling peels aside the clothing, cosmetics, behaviors, and liars that women are raised to use in their interactions with men, you realize that gender and social expectation for how one should behave are trumping a great deal of biology. At least among a certain group of women.

The language Telling and her friends use is slang that might be common in big cities but which may be confusing to other readers. Their experiences of nightly club escapades again might be familiar to a particular group of readers but not to all of us. For that group of women who will identify with Telling and her friends and colleagues, the book should provide hours of amusing stories, ire provoking connections, and reassurance that you aren’t alone.

For the rest of us, we need to dig a bit further to see the gender roles and how they influence this miscommunication even small-town, rural women can identify with. These women may not have time to go clubbing and may be in dead-end jobs, but they, too, feel the pressure to keep a clean house and make sure they are looking as hot as possible even after a long hard day. If you can get around the slang and the urban nature of most of these stories, you will see more similiarities between women than differences.

That leaves us with potential male readers. Given the underwear cover and the enticing claim this will reveal horrible secrets about women, some men may read this. Again if they aren’t part of this urban, young adult culture, the issues may strike them as odd and the stories could easily be read as male bashing.

Beyond the tales Telling uses to reveal her truths though there are real women and men trying to be part of their society and live up to its expectations while struggling to find a life partner. Will men take the time to read this deeply?

That’s the final test for this book. How will the intended audience react and how much time will those of us outside that group invest in understanding the Dirty Girls message, essentially that we’re all more like each other than we might expect?

Dirty Girls is definitely worth checking out for single career women looking for an amusing validation of their experiences. Sharing it with your girlfriends is certainly another great bonding activity, but you might want to think twice before handing it to your new boyfriend. Maybe you could show him how human you are, revealing these truths yourself and encouraging better communication in the process. Ultimately honest communication is going to help your relationship far more than any book could.