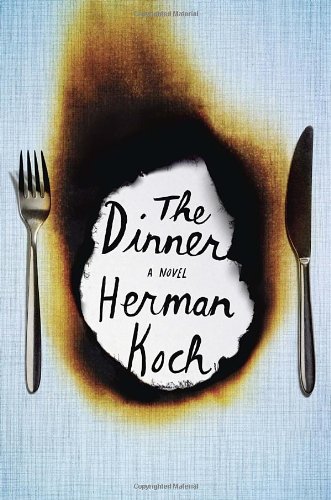 It would be maddeningly easy to begin my review of Herman Koch’s The Dinner like this:

Take a pinch of intrigue, sprinkle in some sibling rivalry, spice with tension. Mix well. Then let the concoction simmer and stew for a while, before serving with a side order of violence, and you have a recipe for a riveting read.

And I was seriously tempted to do so, for the simple reason that such blatant cliché would be bound to get up the nose of author Koch’s protagonist/narrator, Paul Lohman. For Paul is a man waging war on cliché, driven wild by the hypocrisy of modern life and to the edges of madness by his hatred of “performance.”

And getting up Paul Lohman’s nose has one sure-fire result in The Dinner: There will be fireworks. Broken crockery. Overturned plates. A dinner spoiled.

Because in essence that’s what we yearn for as readers. The premise of this novel—two well-to-do families meet at an exclusive restaurant on an idyllic evening in cosmopolitan Amsterdam—is all well and good.

But we don’t want to get our teeth into some placid fable, we want to read of conflict, of hairs in the soup. We want to hear that terrible false note in the awkward silence as one diner scrapes his knife on the plate.

As Paul observes: “tornados, hurricanes, and tsunamis have a soothing effect. Of course it’s terrible—we’ve all been taught to say that we think it’s terrible. But a world without disasters and violence—be it the violence of nature or that of muscle and blood—would be the truly unbearable thing.”

So I’ll say this now. The Dinner is not a comfortable, or easily digested read. But it is brilliantly conceived nonetheless. Because at its heart it is an exploration of the boundaries between appearance and reality, between victims and victimhood.

Though the vast majority of the action takes place around the dinner table, the journey takes in questions of identity and nationality, race and class, sexual politics, beliefs and values, and that eternal question of nature versus nurture. Paul observes:

“All I want to talk about here are the things I heard and saw during our little get-together at the restaurant.” And that is true, to a certain extent, but what is telling is the things that are not said, the things that fall through the cracks, the stains and scratches which would have the health inspector’s black-mark pen twitching.

If this were American fiction, it would concern what lies behind the white picket fence—private shame, secret fetishes, the ghost of violence. The Dinner is Dutch in outlook—and here, ably translated by Sam Garrett—but deep down it is the same thing. It is about exposing the hidden private face that differs so wildly to the one presented in public.

As the two families eat, these weevils of tension, of awkwardness, of shame, begin to show themselves until finally, climatically, they must confront the biggest weevil of the lot.

Which recalls the famous Lionel Shriver title. Here, the children of both families have also been involved in a shocking act of violence that the parents are endeavoring to cover up in the face of a police investigation and widespread national opprobrium.

Mr. Koch is an expert at building tension and he drip-feeds us with just enough juicy tidbits of information to leave us slavering for more. Which is some trick to pull off, because the more he tells us, the less comfortable things become. The less we actually want to know about “reality.”

Mr. Koch’s vehicle for the exploration of this disconnect between appearance and reality is inspired. Paul, his narrator, is a cynical, often misanthropic man who refuses to take anything at surface value. He sneers at the ostentation of the (unnamed) restaurant of choice with its “ridiculously high” ceilings, and its pretentious portions—“The void here, that part of the plate on which no food at all was present, had clearly been raised to a matter of principle. It was as though the empty plate was challenging you to say something about it, to go to the open kitchen and demand an explanation. ‘You wouldn’t even dare!’ the plate said, and laughed in your face—and the way the manager sticks out his little finger—“that pinky. Why would anyone point with their pinky?” and the way it prides itself on “serving ‘all organic’ products—the meat came from actual animals, but only animals that had led ‘a good life’.”

He fumes at the interruptions: “That was one of the disadvantages of these so-called top restaurants: all the interruptions, like the exaggeratedly detailed review of every pine nut on your plate, the endless uncorking of wine bottles, and the unsolicited topping up of glasses made you lose track.”

And Paul is wonderfully set off against his brother, Serge, who is a personality politician in the running to become Dutch prime minister. Serge likes to give the impression that he is normal and human, that “anyone who voted for Serge Lohman was voting for a normal and human prime minister.” Serge’s ‘magic’ is in his application of his public face: on a podium “and in the spotlights and on TV literally begins to shine—how, in other words, he becomes a politician with charisma.”

Serge calls to mind the Cheshire cat grin of the former British PM, Tony Blair, or else Putin: “He sawed his own wood for the fireplace as well. Sometimes it looked almost like a publicity shot for his election campaign: Serge Lohman, the people’s candidate, with a wheelbarrow, a saw, and burly blocks of wood—a regular man like any other, the only difference being that few regular men could afford a summer home in the Dordogne.”

So reliant upon public opinion and reputation, Serge perhaps stands to lose the most should the details regarding their children’s crime come to light. And yet, during the dinner, he smiles and shakes hands with fellow diners, and poses for photographs. And here, there is a sense of the Dorian Gray about him: while this politician’s public ‘face’ beams, there is an ugly, rotting portrait kept in an attic.

Of course, the price you might pay for wearing a mask is for that mask to be unceremoniously removed, and this is what happens during the course of the novel.

And Paul revels in this: “I didn’t say a thing. I won’t deny that this was how I liked to see my brother: floundering. I wasn’t about to throw him a life buoy.”

But Paul himself is slowly unmasked, and slowly but surely we realize there is more to his cynicism than at first met the eye. Which makes for even more uncomfortable reading. Gradually, we learn about highly troubling aspects of his character. Suddenly we aren’t so sure we should be enjoying his company around the table quite so much. For we have been. We’ve been taken in by what Paul has said, by his worldview, to such an extent that once the magician pulls back the tablecloth and the truth is revealed. . . .

Paul observes: “In all domestic arguments—as in all fistfights and armed conflicts, for that matter—there comes a moment when both, or one, of the parties can step back and prevent the situation from deteriorating any further. This was that moment. I wondered briefly what it was I was hoping for. As family and table companions, it was our role to intervene, to speak words that would put things into perspective and so allow the parties to be reconciled.”

The Dinner never steps back. It presents a world built on flimsy premises and promises, a world in which the tectonic plates of youth and age, innocence and experience, rich and poor, rub together. It presents a fragmented “reality” apportioned through the immediacy of Jackass, mobile phone videos, and YouTube. And it presents a group of four parents trying to come to terms with what this means for their children.

Finally, though, it posits that age-old question: Just how far would a parent go to protect their child?