Dimensionism: Modern Art in the Age of Einstein (The MIT Press) 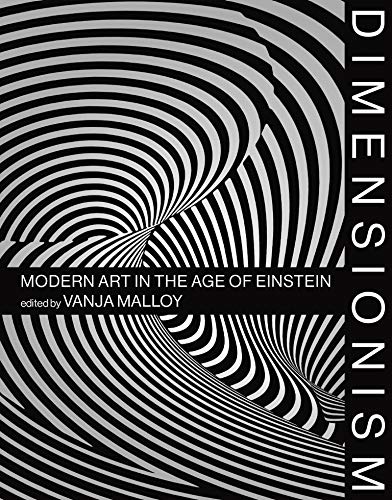 “Dimensionism: Modern Art in the Age of Einstein documents the expansive influence of modern scientific discovery on art and art theory . . .”

Every so often there happens in the world a major shift in understanding: flat world versus round world; earth centered system versus sun centered system; etcetera. Dimensionism: Modern Art in the Age of Einstein is based on one such paradigm overhaul differentiating between Euclid’s classical geometric theories about the static shape of the universe, which dominated scientific thought for over 2,000 years, and Einstein’s observations which overthrew it in the early 1900s. Not only did Einstein’s discoveries cause an uproar in scientific communities, the impact reverberated into the arts and humanities as well.

Einstein’s special theory of relativity (which resulted in the famous E = mc² equation) was published in 1905 and revealed the speed of light as a constant measure. What really rocked the world with this theory was the concept that there were more than three dimensions. Movement in space coexisted inseparably with time and together they constituted a fourth dimension.

In 1915, Einstein’s general theory of relativity added gravitational pull to the special theory mix meaning that the straight line was no longer dominant. In Einstein’s scenario, “the universe takes on a completely new dimension; because of the curvature of space, parallel lines no longer need to be parallel, and the three angles of a triangle are not required to add up to 180 degrees.”

On paper, these two theories were tucked squarely in the realm of science. But one afternoon in January 1925 the North American continent witnessed a total solar eclipse and scientists had visual evidence “of the warped celestial space created by the sun’s enormous mass.” Gravity was proven to influence matter, and space-time; Euclid’s universe was completely debunked. People from all walks of life now realized that just because they could not see something with their naked eye, did not mean that it did not exist. Advancements in inventions such as the telescope and the microscope also helped to broaden and solidify this perspective.

Artists were not immune to the headline news frenzies. Space themes found their way into all genres of art. One particular poet, Charles Sirató—a Hungarian then living in France—took this chain of thought even further. It was his observation that the addition of a fourth dimension required each artistic medium to push the boundaries of their established dimension. Poetry, he surmised, must move from one dimension to two. Painting must push from two dimensions to three. And sculpture from three dimensions to four. A new form of art would eventually engage all the senses, all dimensions, and move about as if vapor.

Sirató wrote a manifesto, published in May 1936, describing this particular artistic phenomenon and labeled it the Dimensionist Manifesto. Dimensionism: Modern Art in the Age of Einstein contains a comprehensive study analyzing the creation, publication, and significance of this manifesto to the broader era of mid-20th century modern art production.

Four essays elaborate on different aspects of the Dimensionist Manifesto. Sirató’s biographical information, the impact of the fourth dimension on artists such as Duchamp and Kandinsky, the role of modern science in American art, and the combination of Cubism and quantum mechanics in art history are presented by different contributors. Each article dips a toe into both the sciences and the arts and borders on the academic with some being easier to follow than others.

Reproductions of nearly 100 pieces of art illustrate the concepts of and intensions behind the manifesto. Artists include Joan Miró, Jean Arp, Alexander Calder, Sonia Delaunay, Cesar Domela, Ervand Kochar, Isamu Noguchi, and many others who were either directly involved in endorsing the manifesto, or were creating art that embodied the philosophies behind it.

The English translation of the Dimensionist Manifesto (in two different versions) is included as an appendix, although it might make more sense to read this before the collection of essays. Its simple and succinct 60 lines set a foundation for what to expect in the rest of the book and it is heavily quoted through the various essays.

A very charming and personable excerpt from Sirató’s memoirs rounds out the project. Through the memoirs one gets a glimpse into the type of confident, if not enthusiastically pompous, character Sirató must have been and how he navigated life during this very impactful span of history.

Rather than an art philosophy that dictated the course of art creation, Dimensionism articulated a trajectory in art that was already occurring in artistic settings all around the world. It could even be argued that it became the primary definition of what it was that made art modern in the 20th century. Dimensionism: Modern Art in the Age of Einstein documents the expansive influence of modern scientific discovery on art and art theory and will serve as a source of reference in either academic setting.