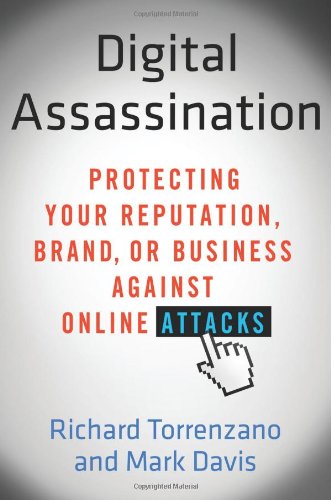 “Digital Assassination is a comprehensive, knowledgeable exploration for anyone who wants, or needs, to know more about how best to survive in the digital universe.”

Be afraid. Be very afraid. Because whether or not you use the Internet, you do have a digital reputation to protect, and you had better pay attention to it. Those who do use the Internet have a bigger stake in the game, but even if you’ve never been “online,” never signed on to an electronic mail account, selected a site with a web browser, or even owned a computer, you still have a digital reputation.

In Digital Assassination, Mr. Torrenzano and Mr. Davis make it quite clear that protecting a digital reputation—your own, your business’s, a brand’s, or that of a long-lost relative—is a little like chasing after spilled water which seeps into every crack and crevice it finds. Mr. Torrenzano, a strategic communications consultant and New York Stock Exchange veteran, and Mr. Davis, a former White House speechwriter, bring their considerable knowledge and experience to bear on this new and very difficult area.

What is “digital assassination?” The authors describe it as “a willful act by someone wishing to do harm through the Internet. It unfolds as a deliberate campaign to spread harmful lies that the assassin has concocted about you or as an attempt to take a fact about you grossly out of context or embellish it, making an ordinary shortcoming seem ghastly. Words are then forged into swords to be thrust into the gut.”

All of this becomes a part of the personal or professional “digital record:” the online reputation of individuals, groups, companies, etc., that impacts customers, partners, profits, and popularity. It permeates the ether—and then spills out into the physical world.

Examples abound for all “Seven Swords,” and not only enough for the reader to get the point, but to tire them out. Half as many examples would have worked just as well and made Digital Assassination a more manageable length. Among the more famous examples are the “evil cloning” of presidential campaign sites, celebrity telephone calls and arrests gone “viral” through a myriad of web sites, product rumors which keep buyers away, and the seemingly endless issues of accuracy involving Wikipedia. Among the less infamous is the jilted boyfriend who changed his ex-girlfriend’s Netflix ratings to display a list of films which had “indiscretion” as their main theme (think The Scarlet Letter and Indecent Proposal).

For the famous and not-so-famous, the reasons for ruining a reputation, a product or business, changing an election outcome or “getting even” has not changed since the rise of modern newspapers, the 18th century coffee house, or even cave paintings. But using the Internet, through its many business, communication formats, and applications, allows those with power, as well as those without, access to so many ways to cleverly and quietly manipulate a persona, that digital assassination outpaces its many analog counterparts by a factor greater than we can imagine.

At the close of Digital Assassination, Mr. Torrenzano and Mr. Davis explain how the best defense is a good offense in “The Seven Shields of Digital Assassination.” They address each of the “seven swords” from the previous chapters. From being “Internet Savvy” to completing an honest “self-inventory,” to “looking at yourself from the point of view of a digital assassin” and creating a “new and improved” image on the web, the authors tell us how to survive and if necessary, to recover. Also included is game plan that can be personalized as a strategic and tactical approach.

It would have been easier to follow the themes if the “shields” and “swords” were integrated into the same chapter, bringing each problem and remedy closer together. Instead, by so significantly separating the cures from the illnesses, the reader needs to work harder to follow the flow. Better organization would have helped here.

Despite these issues, Digital Assassination is a comprehensive, knowledgeable exploration for anyone who wants, or needs, to know more about how best to survive in the digital universe.