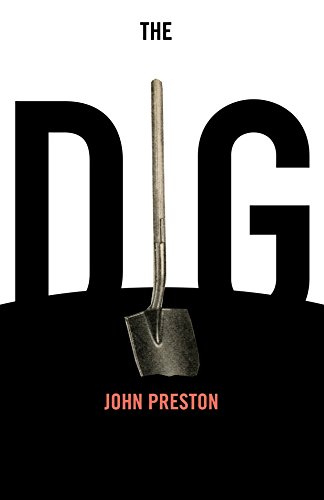 Described as a “fictional recreation” The Dig tells the story of the excavation of the famed Sutton Hoo burial site in Suffolk, the findings of which now have pride of place and a permanent home in the British Museum.

The story is told through chapters dedicated to the eyes of the main protagonists: Basil Brown a local amateur archaeologist, renowned for his expert knowledge of Suffolk soil who makes the first discoveries; and Mrs. Edith Pretty, the owner of Sutton Hoo House and land who has long harboured the conviction that various grassy mounds on her property conceal buried treasure. Mrs. Pretty invites Mr Brown to investigate on the recommendation of the local Ipswich Museum Committee. Other minor local characters are Mrs. Pretty’s lonely young son Robert, and her nephew Rory Lomax, the staff of Sutton Hoo House, the wife and assistants of Mr. Brown, and the various officials of the Ipswich Museum Committee.

As the Suffolk soil gradually yields its treasures bigger fish appear on the scene—all eager to participate in and claim credit for the find, among them the Ministry of Works, some minor aristocracy, and a well-known archaeologist Stuart Piggott and his wife Peggy from Cambridge, who are apparently in the middle of an unsatisfactory honeymoon —unsatisfactory, that is, from Peggy’s point of view. This leads her to a rather abortive dalliance with Mrs. Pretty’s nephew.

The suspense and delicacy of the excavation process are beautifully conveyed, particularly through Mr. Brown’s eyes, as is his respectful but close relationship with Mrs. Pretty. The latter is torn by her loyalty to the local archaeologist and her awareness that this magnificent find needs to be shared beyond the local authorities.

The British feudal system, alive and well in 1939 on the eve of war, is deftly sketched in through the domestic interactions of Sutton Hoo House and the feuding hierarchies of museums and archaeologists.

In general the bio-fiction genre works very well in conveying the complexities of these relationships and in delineating the characters, though a complete list of the dramatis personae would be helpful particularly in relation to the various men struggling for possession of the site.

It is a measure of the success of this approach that the reader feels that much more could profitably be learned about Mrs. Pretty; it is perhaps a measure of the dangers of the genre that we might just be learning too much about the private life of Stuart Piggott who is or has been a household name in British intellectual circles.

Overall The Dig is an enthralling read that whets the appetite for more information about this momentous find to those not familiar with it; it elaborates the backstory for any visitor to the British Museum; and it provides some sometimes amusing insights into the archaeological establishment, which Mrs. Pretty navigates with admirable skill.