Diana: Style Icon: A Celebration of the fashion of Lady Diana Spencer, Princess of Wales 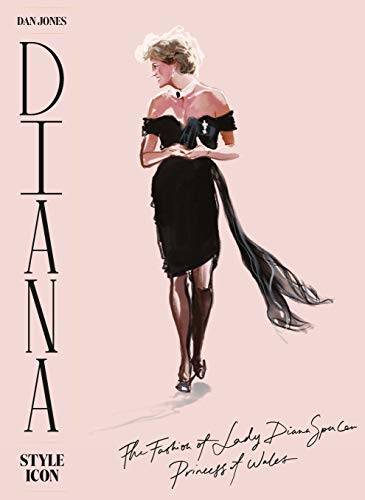 Dan Jones has meticulously researched and almost surgically documented Diana’s adult life (pre, during, and post marriage to Prince Charles) by offering the reader a “menu” of what she wore, when she wore it, and who designed each outfit. It is a great sadness that with all the work that went into this chronicle that Diana: Style Icon: A Celebration of the Fashion of Lady Diana Spencer, Princess of Wales is weakest in the visuals.

This reader who “grew up” during this period of the British monarchy as well as being in the fashion business during this era was sadly disappointed that Liz Tilberis is not mentioned or alluded to anywhere in this tome. Most, if not all, dedicated and fashion followers and readers are well aware of the influence that Ms. Tilberis had on polishing the image of the “new Princess Di” so why would her name not be mentioned or noted?

Unfortunately, the illustrations of each outfit are not what one might call sufficiently fashion worthy or fashion savvy, which might be coupled with the text since the descriptions are less than properly described in the vernacular of fashion. This is a book that should have been an absolute delight to read as well as take in visually, but while the text is stronger than the images, the totality that the reader is proffered is much less than what it should have been.

The fashion aficionado will find it somewhat amusing, somewhat informative, but overall disappointing as photography or more fashion worthy detailed illustrations would have most definitely taken Mr. Jones’ work to another level of professionalism. If you are just looking for a bit of fluff or nostalgia, then this might just be the way to lose yourself in times gone by.