Diamond and the Eye (A Detective Peter Diamond Mystery) 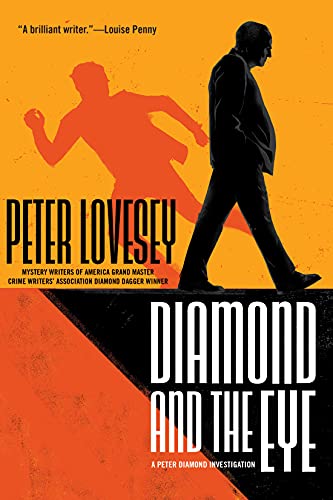 “‘Every private eye from Sherlock Holmes to Matt Scudder needs a line into the factory. Sam Spade had his tame sergeant, Tom Polhaus. Philip Marlowe had Officer Randall from Central Homicide. It comes with the territory.’”

Peter Lovesey’s Peter Diamond investigation series is in its 20th full-length title, and with age comes the privilege of taking things very lightly—so Diamond and the Eye is an almost nonstop giggle, as well as a classic police detection episode with this British Detective Superintendent. It’s the perfect prescription for those who’ve been taking their lives (or their crime fiction reading) too seriously.

From the very start, Diamond is fed up with a private investigator—the private “Eye” of the title—crashing into his Friday evening, and then a missing person case as well. Diamond’s perception of PI Johnny Getz (a nom-de-dick for the job) tells it all: “The stranger’s voice was throaty, the accent faux American from a grainy black-and-white film a lifetime ago. This Bogart impersonator was plainly as English as a cricket bat. His face wasn’t Bogart’s and he wasn’t talking through tobacco smoke, but he held a cocktail stick between two fingers as if it was a cigarette . . . he was dressed in a pale grey suit and floral shirt open at the neck to display a miniature magnifying glass on a leather cord.”

From calling Diamond “bud,” to speaking of him as “Pete” to colleagues, Johnny Getz is a man without boundaries—but with a determination to get his first and only PI job done for his relatively trashy client, Ruby, daughter of an antiquities dealer named Seppy Hubbard. Seppy has vanished; Getz is supposed to find him or find out what happened to him, and Diamond, fighting back as hard as he can be bothered to do, soon discovers there’s been at least one murder involved, with every reason to bring in his team.

But there’s nothing straightforward about tracking down a missing (perhaps dead) dealer, when Johnny Getz keeps butting in. Peter Diamond’s Detective Sergeant Ingeborg Smith attempts to keep the peace, assuring Diamond that Getz won’t stay involved: “He’s out of his depth now. Private eyes don’t investigate homicides except in books. A missing person case, maybe, but not a killing.” But once Ingeborg does meet “Johnny,” she’s got to admit he’s going to stick around as they work this case.

Johnny Getz litters his conversation and his performance with references to PIs of the past, all in books. Readers of classic detective fiction can giggle and guffaw as they ride shotgun with this new wacky character, recognizing his American PI heroes well before the British police team grapples with what Johnny’s attempting to copy. Finally, Ingeborg feels the need to take a stand: “Don’t knock my guv’nor,” she warns Getz. His response is to tell her how much he values Diamond. Why, after mentally calling the DS a fat slob? It’s simple: “Every private eye from Sherlock Holmes to Matt Scudder needs a line into the factory. Sam Spade had his tame sergeant, Tom Polhaus. Philip Marlowe had Officer Randall from Central Homicide. It comes with the territory.”

Though Ingeborg protests that PIs belong in a different country and a different century, far from 21st century Bath in Britain, she doesn’t have a chance of talking Johnny Getz out of getting his man, so to speak. And getting paid.

Through the nonstop campy humor runs a solid and clever little mystery, with some great red herrings and a fine twist before solution. The one part unresolved by the end of Diamond and the Eye is whether Johnny Getz will now leave “Pete” alone.

It’s the nature of a series to leave the reader suspecting there is more to come of this frustrating and funny pairing in Peter Lovesey’s books to come.