The Devils You Know 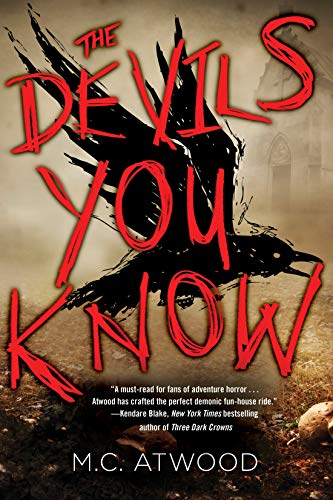 “a literary tour-de-force of the supernatural genre, at the same time disturbing, frightening, and fascinating.”

Boulder House has a history. It was built inside a boulder by a man filled with hate. Some people consider it “magic.” Some call it a masterpiece.  Others say it’s accursed.

“He added warehouse upon warehouse, rooms to house his collections.  Rooms that ran one into another, and the result was a house not sane, that held within it a seething energy. Waiting for the next poor souls to join them.”

Every year, the seniors from River Red School take a field trip to Boulder House.  Participation is purely voluntary but those who attend are exempt from final exams.

This year, five troubled students are going on the trip, each of them against his will.  They are: Violet, who’s been forced into an affair with one of her teachers; Paul, a new student and a dreamer, more comfortable with a sword and a sonnet than contemporary life; Dylan, hiding his family’s bigotry and prejudice behind goth make-up; Gretchen, poor but proud, using clothing designs to hide her insecurities; and Ashley, daughter of a would-be senator, the “mean girl” of the group, with a secret she doesn’t dare share.

Breaking off from the others, this rebellious and disparate group of malcontents charge into Boulder House and find themselves in a living nightmare.

“We move past the table, down the stairs. It’s dark and gloomy—swirly dust dances around us every time we move. You have to duck to get around things. There’s a ginormous fireplace that is actually fireplacing with actual fire.  Little windows shoot out shafts of light but it’s a losing battle. The place is shadow and dust.  Something’s missing, but I don’t know what it is.”

Then the thing appears, climbing down from the wall. It smiles . . .

“But it’s no smile I ever want to see again, and it says, ‘We’re going to play a game now, you and me.  Though I should warn you: the House always wins, and I, my dear children, am the House.  Unlike real life, you will have a chance to make it . . . You are so complicated yet so simple. I have no doubt you will succumb to my game.’”

There are rooms within rooms, gauntlets to run, living carousels filled with unicorns, sabre-toothed tigers, wizards, and knights, everything unbelievable and believable at the same time. Some are allies, others are enemies. Only one thing matters, however, and that’s survival, for the wounds inflicted hurt, and the blood flowing is real, and they have to work together to get out.

“We run until we hit the next door. We all stop straight up. Through the door are the doll carousels. Behind us are murderous band players and the creepiest soul-sucking clown you could ever imagine. And whatever else managed to follow us.

“This, ladies and gentleman, is being stuck between a rock and a hard place.

“Then the clown comes running around the corner, its laugh echoing through the corridor. We run through the door.”

The Devils You Know is a difficult novel to summarize. It makes sense while being read but because of the various narrators, trying to explain it to someone isn’t easy. It’s best described as viewing someone else’s night terror; it makes sense at the time, but trying to put it into words brings chaos. The best comparison would be to the final scene in the nightmare from the old British horror movie Dead of Night.

Told through the point of view of each of the five students, The Devils You Know has been described as similar to Rashomon, in that it gives varying views of the same event. In this novel, that effect works as it allows each of the participants to tell how she/he perceives what’s happening in relation to what everyone else is sensing.

The dialogue is vaguely stream-of-consciousness, occasionally amusing, sometimes actually laugh out loud hilarious, but in a moment twisting into absolute horror, while staying within each character’s personal mannerisms.

The Devils You Know is truly a literary tour-de-force of the supernatural genre, at the same time disturbing, frightening, and fascinating, as it reveals the gradual transforming of each student from someone at war with the world, experiencing adolescent angst and isolation, into a close-knit fighting group, relying on each other and working together to break through the House’s defenses and escape its threats. It’s said no matter what, the House always wins. That may be true, but in the meantime, “We’ve been taken apart and put back together in different formation, a part of each other. Together.”

For thrills, chills, and some highly meditative afterthoughts, The Devils You Know is highly recommended.