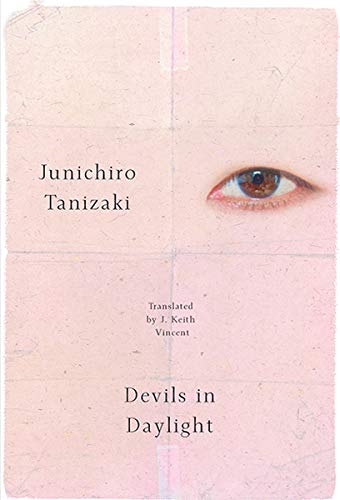 There is and has always been a voyeuristic element to crime fiction. We, the readers, salivate on every word that lovingly details a gruesome murder, a shocking blackmail scheme, or a robbery gone hideously wrong. The novel’s detective is usually our proxy eyes and ears, although they are much smarter, more sophisticated, and braver than we are.

In Junichiro Tanizaki’s novella Devils in Daylight, none of these traditions are applicable. Although originally serialized in two Japanese newspapers in 1918, Devils in Daylight is a thoroughly contemporary tale of madness, obsession, and sexual perversion.

The story begins like a clever, almost orthodox (which the Japanese call honkaku) mystery. The professional writer Takahasi is called up one day by Sonomura, a wealthy eccentric, and is forced to listen to an outlandish story. In Takahasi’s eyes, his friend is a mental case who is far too obsessed with crime novels and the new fad of moving pictures. However, during one of his outings to the movies, Sonomura chanced upon a cipher left behind by a couple of young lovers. The cipher turned out to be a variation of the one used by Edgar Allan Poe in his classic short story “The Gold-Bug.”

Instead of pointing the way to a lost pirate’s treasure, the cipher Sonomura translates points to an upcoming murder involving the young lovers and a third man. Rather than go to the police, Sonomura convinces Takahasi to join him in secretly watching the murder take place.

A rumination on the act of reading or viewing fiction itself, Devils in Daylight is a psychological puzzle box that ultimately explores multiple levels of illicit passions. As with many other characters in Tanizaki’s fiction, Takahasi, Sonomura, and the gang of murderers all exist within a sub-stratum of modern society wherein in wealth, leisure, and city life create a vortex full of lust and strange sexual urges.

J. Keith Vincent’s translation of this somewhat obscure novella is commendable for many reasons. Not only is the English clean and clear, but also the novella’s confessional-mathematical nature is expertly handled. Vincent’s Afterword is a must-read as well. In that section, readers unfamiliar with Tanizaki’s importance in the history of Japanese fiction will be educated fully.

This highly unusual mystery is the perfect afternoon diversion for all readers interested in exploring the more metaphorical and psychological elements of the detective fiction genre.