The Devils of Cardona 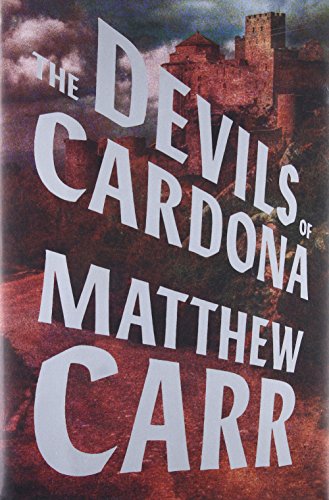 In 1320, a body of armed men began burning, looting, and killing their way through a large swath of France. Beginning in Normandy, this loose confederation moved south and west into the regions of Poitou, Aquitaine, and Gascony. Finally, they crossed the very permeable border into the Spanish kingdoms of Navarre, Aragon, and Catalonia. They continued killing there.

Jews and Muslims were particularly singled out for murder, thus giving this large-scale crusade a religious tinge that’s hard to rationalize as anything other than discriminatory violence. The use of the word crusade is apt for another reason: this moment in history has come to be known as the Shepherds’ Crusade. For many, the Shepherd’s Crusade of 1320–1321 is emblematic of the irrational nature of the medieval period—a time when angry mobs could be formed without too much provocation.

This is the world of Matthew Carr’s The Devils of Cardona. Set in late 16th century Spain, an age when wars of religion still produced thousands of dead bodies, the novel concerns a man named Bernardo Mendoza, a licenciado and a judge given the unenviable task of stopping a religious rebellion in its infancy.

Deep in the mountains of Aragon, in a Morisco village called Belamar, a corrupt, rapacious, and downright filthy priest named Father Juan Panalles has been brutally murdered in his own church. The church was then subjected to desecration, with smashed icons and decapitated statues of the Virgin Mary.

Spain’s King Philip II and his advisors are even more worried about the Arabic writing left behind on the church’s walls. Could it be the work of the Redeemer, a mysterious Morisco dedicated to reconquering Spain in the name of Islam?

With a motley crew consisting of two militiamen, a teenaged scribe named Gabriel, a stolid German swordsman named Johannes Necker, and his own rakish cousin Ventura, Mendoza sets out from the crown’s homeland of Castile for the aggressively independent Kingdom of Aragon and the hated village of Belamar.

As with most mystery novels, nothing is as it seems. Many Moriscos, or former Spanish Muslims who were forcibly converted to Christianity by the Spanish crown, continue to worship Allah, while the ostensibly pious Countess of Cardona continues to secretly live in sin. Furthermore, like the best Raymond Chandler mystery or Dashiell Hammett thriller, The Devils of Cardona contains zigzags of treachery, with major players including Castilian and Aragonese nobles, Morisco insurgents, bandits, French Protestants, and even the Inquisition itself.

It’s clear that Carr, who has buttered most of his bread as a journalist and historian, has put in many hours studying the traditions and tropes of the detective fiction genre. Although not a hardboiled egg like Marlowe or Spade, Mendoza walks the line between rogue agent and official mouthpiece. Carr’s protagonist is also one of detective fiction’s many crossbreeds. He’s the son of an Italian Catholic mother and a Jewish converso father who grew up in the defiantly Muslim city of Granada and became one of the many heroes of the Alpujarras rebellions and the Battle of Lepanto.

Mendoza is also an arch idealist in a world full of graft and deceit. These ideals are put to a brutal test in Belamar, for although nothing on the surface is for certain, what is true in the case of The Devils of Cardona is that violence—wanton, pitiless violence—is ubiquitous and used by all sides.

Carr’s debut novel moves at a steady pace that is neither glacial nor breakneck. When he slows down it is done in order to show off his erudition. The man wrote Blood and Faith: The Purging of Muslim Spain after all, so he knows what he’s talking about when it comes to the bad blood between the Old Christians and the Moriscos.

There is one glaring problem with Carr’s historical accuracy, however. While the scenery and history appear correct, the characters do not. Carr’s 16th century Spaniards at times talk like jaded 21st century metropolitans, and their hang-ups are painfully obvious (if not a little tiresome) to anyone who has been paying even a modicum of attention to pop culture since the 1990s. From closeted homosexuals to proselytizers of religious tolerance and social diversity, The Devils of Cardona may come a little too close to being a left-leaning, bourgeoisie fantasy for some readers.

That being said, the central story and its complex mystery holds the drifting ship together, and Carr certainly delivers a powerful punch in his debut. The Devils of Cardona is also the perfect set-up for a sequel, for Mendoza and his men have plenty of life left in them still.