Devil's Bargain: Steve Bannon, Donald Trump, and the Storming of the Presidency 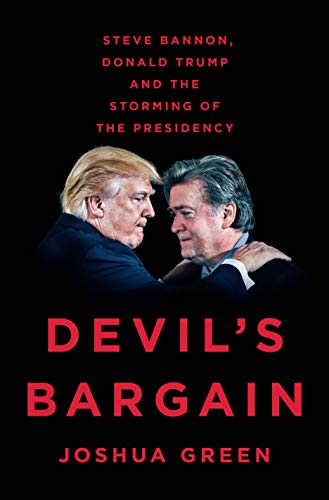 Ever since the election results of 2016, millions of American liberals, moderates, and even a few “establishment” Republicans have lived in a type of mental limbo. They simultaneously do not want to accept the fact that New York billionaire Donald John Trump is the president of the United States, while on the other hand currently spending blood and treasure on a multi-front campaign to try and understand how Trump won. In sum, Trump’s victory was a complete shock to many in the chattering class because their initial mocking of him failed, their pointed jokes failed, and then their fear-mongering about Trump’s “racism,” “fascism,” and other bad words failed, too.

Joshua Green, a longtime political reporter with stints at The Atlantic and Bloomberg, has offered up one explanation for the rise of “Trumpism.” Devil’s Bargain actually has very little to do with Trump himself. Rather, Green’s book attempts to argue that his election victory in 2016 was orchestrated by Steve Bannon, an iconoclastic publisher and advisor who used Breitbart News as his primary launching pad to the White House. In Green’s telling, Bannon, a slovenly firebrand who has long sought to create an international front of right-wing populism, is the Machiavellian maestro who found in Trump the perfect avatar for his vision.

Green’s portrait of Bannon is both well wrought and very flawed. Green goes into great detail about Bannon’s upbringing and how his working-class Irish-American Catholicism dovetails perfectly with his politics. Similarly, whether he intends to or not, Green casts Bannon as a heroic and tireless crusader who enjoys the role of outcast. Even confirmed Trump haters may find something to like about Bannon, for this veritable unknown managed to beat the gatekeepers of the Republican Party, the Democrats, and the liberal consensus of the twenty-first century in just one election.

However, Green’s failure to rightfully see Bannon as a visionary (Green wants to cast him as a force of nature—unthinking and somewhat animalistic) is part of his broader issue with bias. In Green’s telling, everything to the left of Mitt Romney is the “hard-right.” Also, Green repeatedly puts Bannon at the center of the same “vast right-wing conspiracy” that first tried to takedown the Clinton family back in the 1990s.

Hillary Clinton, on the other hand, comes off like a martyr who has been forced to endure the slings and arrows of a rabidly unhinged American Right. Green at one point acknowledges that maybe; just maybe, the Clintons are guilty of corruption, conspiracy, and several violations of federal law. He nevertheless exonerates Clinton based solely on his perception of her enemies. As for Obama, Green compares him to Spock, the emotionless logician of Star Trek.

Overall, Green’s portrait of the American Right suffers from a serious lack of intellectual curiosity. Devil’s Bargain reads like the handiwork of a man who has never contemplated right-wing thought in his life. For Green, conservatives are a mucky series of rabble rousers, who despise immigrants, readily believe all conspiracy theories, and who are too “unwashed” to for consideration (that is until they won the White House).

At no point does Green acknowledge the possibility that Bannon and Trump tapped into a long-overlooked voter class in America. Rather, his rendering turns the Trump phenomenon into a wave of Internet “trolls” and rural rubes delighted by what Green calls Trump’s “white identity politics.”

This final note is especially rich, for Green never once mentions Pat Buchanan, Steve Sailer, John Derbyshire, or other right-wing theorists who have been urging Republicans to reach out to the white working-class since the early 1990s.

For all its warts, Devil’s Bargain is a highly addictive read that takes readers deep inside of the hectic world of American politics. This book not only reveals how a small group of eccentrics managed to upend the trajectory of America’s politics, but it also pointedly portrays the Clinton campaign and the Republican “establishment” as buffoons who got outclassed by a man that Green considers little more than a political carnival barker.

At its best, Devil’s Bargain is an examination of what makes Steve Bannon and why left-wing media figures like Green continue to be puzzled by the 45th president. Be forewarned: There is only one mention of Russia in this book, and it has nothing to do with any hacking or campaign of interference.