The Devil in Paradise: Captain Putnam in Hawaii (A Bliven Putnam Naval Adventure) 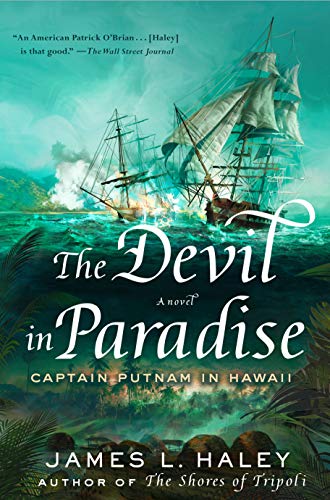 “Some native Hawaiians today might argue that Captain Putnam was misguided in searching for pirates in the South Pacific, because the real pirates had already arrived in Hawaii under the guise of religion.”

In his series featuring sea captain Bliven Putnam, James L. Haley has taken readers to the Barbary Coast to do battle with pirates and into the south Atlantic to take on the English Navy during the War of 1812. Now, in his third installment, he takes his readers to the Kingdom of Hawaii, concurrently with a boatload of missionaries determined to convert the savages of Hawaii to Christianity. Putnam’s goal? He’s still after pirates, this time Malay pirates who looted an American merchant ship, Fair Trader, in the South Pacific. It’s a classic story of guns and Bibles.

Putnam’s wife, Charity, has joined the missionaries while he pursues the pirates, though he has a chance to reunite with her in the Hawaii on the way. Haley does a brilliant job of introducing the reader to Hawaii as it existed in the early 19th century, still under a monarchy but gradually being overtaken by Western ways. The advent of Christian missionaries was but the first fledgling step along a path that would lead to the overthrow of the monarchy at the end of the century and ultimately to Hawaii’s admission to the United States as the fiftieth state.

Some native Hawaiians today might argue that Captain Putnam was misguided in searching for pirates in the South Pacific, because the real pirates had already arrived in Hawaii under the guise of religion. Haley has, himself, addressed those issues to some extent in his previous nonfiction book Captive Paradise: A History of Hawaii.

Haley’s Hawaiian research plays a prominent part in The Devil in Paradise, particularly when he introduces the reader to the larger-than-life (literally) Ka’ahumanu. Had she not been a real person, some readers might believe she was a figment of the author’s imagination.

The favorite queen of King Kamehameha I (the Great), Ka’ahumanu stood more than six feet tall, weighed 300 pounds, and was the first Hawaiian monarch to wholly embrace Protestant Christianity. She is at the core of the Hawaiian portion of the story, and Charity Putnam’s interaction with her puts a personal spin on this fascinating woman.

If there is a criticism of the book, it’s that there are times when the storyline seems to founder in a dead sea while the author unloads his research. For example, although Putnam receives his orders that take him on the novel’s central adventure relatively early, he doesn’t arrive in Hawaii until more than halfway through. He doesn’t confront the pirates until three-quarters of the way in, and even the battle with the pirates seems cursory, starting and ending within the space of a half-dozen pages.

The climax of the fictional story was inspired, in part, by the Olowalu Massacre of 1790, sometimes called “Hawaii’s Wounded Knee,” during which an American sea captain named Simon Metcalfe, commander of the ship Eleanora, ordered the slaughter of more than 100 native Hawaiians at the village of Olowalu on Maui. The comparable event in The Devil in Paradise, the mass killing of native Hawaiians near Hana, Maui, is perpetrated by the captain of the Fair Trader, whom Captain Putnam had avenged by taking on the Malay pirates.

Queen Ka’ahumanu demands justice for the slaughtered Hawaiians. She holds Putnam’s wife and newborn son, as well as the missionaries, hostage, to extort Putnam into delivering the malefactor to her for native justice. Putnam is faced with a dilemma he hadn’t reckoned on when he first set sail: “Even balancing the one worthless life against the twenty worthy ones he would save, the whole incident would easily spell the end of his naval career.” And so, Putnam makes his choice, ironically waging battle with the Fair Trader, which he had previously championed.

Haley certainly knows his Hawaiian history, as evidenced by the narrative, as well as by his prior, nonfiction work, Captive Paradise. For a reader ignorant of, or fascinated by, that history, Haley’s latest is a welcome companion to James Michener’s Hawaii, providing similar information with nowhere near the major time commitment needed to traverse all the pages of that tome.

Captain Putnam put it this way: “I tell you, men who know history have more weapons with which to deal with the world.” The Devil in Paradise provides some of those weapons.

Mike Farris is an author of both fiction and nonfiction, several of which have Hawaiian settings. His historical fiction, Isle of Broken Dreams, is set in World War II Honolulu, and he authored two Hawaiian true crime books from the 1920s and 1930s, A Death in the Islands and Poor Innocent Lad.